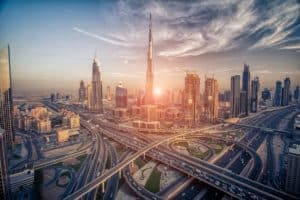 Dubai: the new capital of the Web3

Dubai has long been regarded as the new frontier for the world of digital currencies, becoming home to at least 1,000 companies operating in the sector. According to the strategic plan for 2026, recently approved by the Emirate government’s Department of Finance, it should soon consolidate its position as a global hub for the so-called Web3.

“His Highness Sheikh Mohammed bin Rashid Al Maktoum has instilled optimism in us that has enabled us to become discerning about what is next. We appreciate the achievements of all organizational units over the past five years, which was the duration of the 2021 strategy”.

According to some calculations, the digital asset-related economy contributes $500 million to the Emirate’s economy.

The recent launch of the Dubai Metaverse Strategy by the Sheikh, Crown Prince and Chairman of the Dubai Executive Council, is expected to be a real driver for the city’s economy.

The Dubai Metaverse Strategy, according to what are plans, should aim to create more than 40,000 virtual jobs by 2030 and add $4 billion to Dubai’s economy in five years.

The emirate announced the creation of a Higher Committee for Future Technology and Digital Economy chaired by the Crown Prince of Dubai. The committee will implement ad hoc policies for the digital sector as a whole, overseeing the implementation of strategies related to the digital economy and future technologies.

“Virtual assets are transforming the financial world and are set to be the main drivers of the future global economy. The establishment of the world’s only independent regulator for virtual assets is a symbol of Dubai’s confidence in the potential of this sector. The VARA regime is structured to catalyze collaboration and prioritize public protection.

Our mission is to provide a progressive regulatory framework that can safely enable borderless economic opportunities in the global virtual resources sector. Dubai is a global leader in adopting and adapting to new technologies. With VARA, the Emirate is well positioned to lead the global adoption and regulation of digital assets”.

In February of this year, Dubai launched the Virtual Resources Regulation Law (or VAL) to strengthen the Emirate’s commitment to creating a favorable ecosystem for digital assets.

The new regulation, one of the first and most specific in the world, defines a virtual asset as:

“A digital representation of value, which can be traded, transferred, used as a medium of exchange or payment, or for investment purposes”.

A virtual token, on the other hand, is defined as a digital representation of a group of rights that can be issued and traded digitally through a virtual asset platform.

The post Dubai: the new capital of the Web3 appeared first on cryptodailynews24.com.