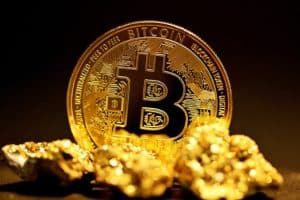 In recent weeks, both gold and Bitcoin have reversed their trends, returning to attract capital.

Interest in gold and Bitcoin returns

Investors are once again betting on gold and Bitcoin

Over the past month, gold and Bitcoin have been reinforcing a bullish trend despite starting from different paths.

Over the past 6/7 months, the yellow metal and the digital currency, despite having common characteristics that make them by their nature safe haven assets, have not performed as expected and have not lived up to this status.

Scarcity in number, their intrinsic value, and the role they have carved out for themselves in the world of finance and beyond should have caused them to rise in value, but physical gold in particular has not performed well at all, suffering a stall at around $1400/$1500 in price.

In the past two weeks, however, due to the continuing crisis, difficulties in finding raw materials, the decrement of a technical recession, and the latest moves in terms of rates by the Fed, have positively influenced reactivating its path.

Gold is hovering around $1,700 currently and futures are slightly more positive than in the past, showing an opening in the market.

A similar, but a somewhat better story is that of Bitcoin, which despite the estimates of most analysts did not break through the $18,000 mark and did not go down to the expected levels of $15,000 or $8,000 according to the most pessimistic forecasts.

BTC has been floating around $20,000 all along and then benefited from a mini-positive trend in the past two weeks to date.

If that is the case, some analysts give it between $26,000 and $30,000 by the end of October with goodwill for those who have abandoned the project.

Both the yellow metal and the queen of cryptocurrencies are once again attracting large amounts of capital and this is also seen in the trading volume.

The utility of safe haven assets

To protect one’s capital, it is certainly essential to place part of the portfolio in one or more safe haven assets.

This is more important at a time when, like this year, inflation is skyrocketing and the countermeasures taken by central banks are not yet sipping the desired effects.

The situation seems to have returned “normal”, all the more so with the macro situation we are currently experiencing, which seems far from its peak despite the fact that the GDP figure improved to 0.9 from 1.6 last quarter.

In short, time has proven Mike Novogratz, CEO of Galaxy Digital, right, who at the microphones of CNBC had said:

“We have had tremendous deleveraging and I believe most of that reduction is now out of the system”.

In the meantime, Ethereum also shifts gears and returns to $1,600/1,700, aided by news of the Merge that will take place indicatively in September.