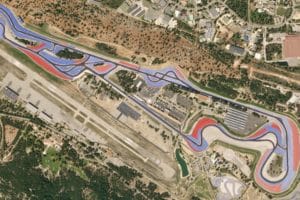 At the Formula 1 French Grand Prix, many international teams were forced to cover up crypto-related sponsors and logos due to uncertainty over French advertising regulations.

According to reports, it appears that the uncertainty of French regulations on the advertising of various products has also targeted cryptocurrencies, forcing many international F1 teams to remove and cover their crypto sponsors during Grand Prix weekend.

These are as many as eight out of 10 teams that currently have partnerships with cryptocurrency companies, such as Alfa Romeo, with Vauld and Floki Inu (FLOKI), and Red Bull Racing, which has ByBit and Tezos as partners, the latter shared with McLaren. Not only that, F1 and Aston Martin have also partnered with Crypto.com.

All of these crypto brands have thus been removed from the competition in France. The issue over product advertisements, also leaves some confusion over crypto sponsors precisely because it is the Autorité des Marche Financiers (AMF) that regulates the domestic financial markets that must agree on what to do.

And in fact, some products, even crypto-related ones, are registered with the AMF, others are pending approval, and some still fall outside the scope of the AMF. Precisely because of this uncertainty, international F1 teams have had to cover their crypto logos.

France vs. Monte Carlo and the list of crypto sponsors

In contrast to the Grand Prix in France, in the F1 race in Monte Carlo, one of the most well-known circuits in the world, all crypto sponsors were exposed.

Indeed, as many as 6 cars from the different stables were sponsored, namely by Binance, Bybit, Fantom, FTX, Crypto.com, Tezos and others.

cryptodailynews24.com was also a partner in the Monte Carlo race, with the magazine’s logo scattered around the circuit and on the various advertising corners during the race. It was the only crypto magazine present and invited to the event.

No to crypto ads, but yes to French CBDC

Recently, the President of the French Central Bank, François Villeroy de Galhau, announced that the bank has begun the second phase of testing a wholesale CBDC.

Despite its strictness on regulations dedicated to crypto advertising, France would actually be one of the most advanced European countries in designing its digital state currency.