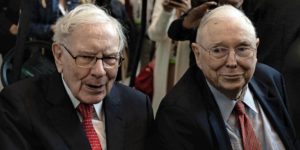 Buffett and Murger’s historical positions have never been pro-crypto but over time this trend appeared to be changing, though evidently not entirely.

“I consider it almost crazy to buy this stuff or trade it”.

This was said by Munger, vice chairman of Buffett’s Berkshire Hathaway when referring to digital currencies at the Australian Financial Review.

Buffett and Murger against crypto

By demonizing this asset, the investor sent a clear message that he does not believe in cryptocurrencies and that these have no future, even going so far as to say that he does not even conceive of how one can invest in this world, which in his opinion represents nothing.

Perhaps Munger’s stark stance is the result of a somewhat dull glaze given his enviable age of 98 years, but the fact remains that with his experience he has seen it all and his words always have appeal among investors and analysts.

The vice president of Berkshire Hathaway draws attention to how in recent weeks the prices of the top 10 crypto by capitalization have collapsed noticeably after six months or more of already underperformance.

The causes are to be found in two main things , firstly the inconsistency of these currencies and secondly a historical fact such as the total collapse in value of the Terra stablecoin and its Luna token that opened the eyes of so many investors casting a bad light on the asset.

The thesis is that the wound triggered by Luna led to a series of knock-on consequences including the problems of some exchanges such as Celsius or others that temporarily halted their operations creating chaos and concern.

The capitalization of the entire asset of digital currencies has lost almost $2 trillion and the financial shark defines in very clear words who trades these currencies.

“I think whoever sells this stuff is delusional or evil. I’m not interested in undermining the national currencies of the world”.

Words that leave no doubt about Munger‘s position.

The words of Warren Buffett‘s partner leave no doubt but clash with some market moves by the largest investor ever.

Indeed, while demonizing the industry on the one hand, on the other hand he is keeping a foot in it in order to generate profits.

The $1 billion investment in shares of Nubank, the largest bank in Latin America for fintech and cryptocurrency exchange clashes with the statements of Buffett’s partner, but business is business and just as you can bet against your favorite team so you can bet in favor of crypto even if you don’t love it.

Easynvest, the trading platform Nubank bought in 2020, has been offering a Bitcoin ETF since June 2021; it is backed by QR Asset Management and is listed on the B3 exchange.

The co-founder of Mercuryo as well as chief operating officer, Greg Weisman, explained in an interview.

“Nubank’s investment can be labeled as Buffet’s way of supporting the crypto / fintech world without taking back his criticisms of the past”.