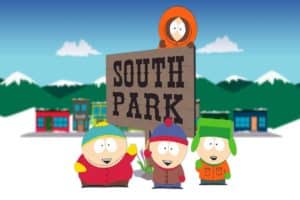 South Park: The parody of the Crypto.com

The series of commercials Matt Damon is making to promote Crypto.com exchange activities cannot be said to be exactly fortunate. These have also aired during the last Super Bowl, and have been attracting criticism on social media since their first release last October.

But the one aired in recent days seems to have really gone too far to stand by the harsh comments that have appeared on social.

Says Matt Damon during the commercial, as he brings a forkful of pee-infused spaghetti to his lips and gags, before precisely whispering the slogan common to all the series of “Fortune Favors the Brave” commercials and taking a bite.

The Crypto.com exchange’s promotional campaign is focusing heavily on sports, having closed partnership deals with Formula One, Serie A football, and Fifa for the upcoming World Cup in Qatar.

The choice of Matt Damon stems from the fact that the company is focusing heavily on younger audiences, and the actor is a favorite among young people.

Recently, Crypto.com also closed a $700 million deal to sponsor the Los Angeles Arena Staples that will be named after the company for the next 20 years.

But the choice to entrust the spot to the actor and other Hollywood stars is likely to boomerang for the company.

The new episode of South Park’s “The Streaming Wars Part 2”, the popular and highly-followed American cartoon series, saw fit to exploit this by pillorying a number of celebrities who have recently promoted or spoken well of cryptocurrencies, including precisely Matt Damon, Gwyneth Paltrow and Reese Witherspoon.

“We are living in a severe drought”,

“There simply isn’t a choice anymore. We have to find alternate sources for water. Hi, I’m Matt Damon. You’ve heard me talk about the wonders of cryptocurrency and now there’s a company that can give us that new source: Pipi Water!”

But the episode also refers to other celebrities who sponsor the FTX derivatives exchange; tennis star Naomi Osaka, for example, has to eat green salad soaked in pee, while Curb Your Enthusiasm’s Larry David enjoys his “favorite drink” straight from a nearby off-screen source.

But the South Park writers have also planned a parody for those who, like Gwyneth Paltrow and Reese Witherspoon, have claimed in the past to have invested in NFTs.

Certainly, as we hear, one of the main goals of marketing and commercials is to generate interest, both good and bad. And looking at the interest and comments generated, Matt Damon‘s commercials should certainly be considered a great success.

The post South Park: The parody of the Crypto.com appeared first on cryptodailynews24.com.