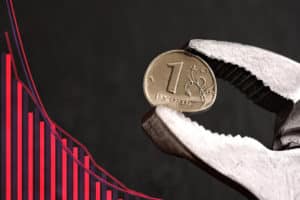 New inflation data compiled by the Bureau of Labor Statistics are out and they are not at all reassuring.

The US CPI figure reaches 9.1%, surpassing Bloomberg analysts’ forecasts of around 8.8%.

The news stirred the markets, which, while partly having factored in this period of high inflation following the Fed‘s interventions over the past six months, were expecting a different figure.

Wall Street is not the only concern, and analysts predict that given the past year and a half of correlation, Bitcoin, Ethereum, and the other cryptocurrencies will also suffer a major devaluation.

President Joe Biden explained how the inflation figure that turns out to be much higher than expected has actually already been exceeded by the facts.

There is a place in the US President’s argument for the idea that the CPI figure does not take into account oil and most notably gas prices over the past month that have improved, if only slightly.

Biden explains that this signal suggests that inflation is at a turning point and is actually about to change direction, in essence if the quarterly figures confirm the negative GDP data we will be in a technical recession but in essence we would already be coming out of it thanks to the aggressive monetary policies of the country’s central bank.

This will be an important month throughout the rest of the year, the CPI data just came out, but it is not the only data that will be of interest to investors, the second quarter GDP data will also come out in July and the quarterlies of major companies are also starting to come out.

This set of data will shed new light on the situation and give us a clear reading of the health of the world economy.

If the GDP data in addition to the CPI data are also confirmed to be negative or beyond expectations, the US economy will technically enter recession and this will certainly affect Asia and the old continent as well.

In a tweet last night, Bitcoin Magazine cited some inflation data concerning a sample of countries from all over the world highlighting how a 9.1% can send the United States of America into crisis but 78.6% of Turkey and a 167% of Venezuela are still not enough to decree the death of an economy.

Data should always be taken with a grain of salt since contexts, economic and financial capacities are varied and most importantly, fundamentals and responsiveness are different.

Analysts predict that the world’s leading economy is about to experience a major reversal in the markets due in part to this CPI data and will likely bring with it a domino effect that will also affect Europe.

Stockbroker, entrepreneur, and radio commentator Peter Schiff pointed out that inflation of this magnitude will spill over into the real estate sector with great violence and that the 5.6% rate hike figure is underestimated yet is representative.

The post Inflation continues to rise appeared first on cryptodailynews24.com.