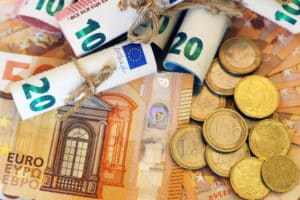 Euro-Dollar parity has been reached

On Monday, the dollar, which was already emerging from a week of good results, reached substantial parity with the euro, the strong currency of the old continent.

A new historic level touched: parity between the Euro and the Dollar

For the first time in 20 years, the two currencies are now at parity, a historic figure that changes the macroeconomic picture.

The Euro is suffering from monetary policies that were late and not as incisive as those of the US Central Bank, which has been pressing hard on raising rates since the beginning of the year.

The Fed, while at first considered inflation a passing problem, had to reassess the situation pressured by events and publicly apologize. Subsequently, the pace altered.

Gold trudges back to $1,700/$1800, while Bitcoin is recovering from a deleveraging now discounted by investors, even though it is not yet bullish. And so investors have been re-evaluating the dollar.

The parity between the two major currencies has very important macro consequences.

While it has always been a safe haven asset in its capacity as a reserve currency, this milestone implies a step change in the export of the old continent.

European countries will have an advantage in exporting their goods, but this brings with it also disadvantages. From a supply point of view, there will be price increases.

Gas, oil, metals and raw materials that are mostly imported will be paid for at a higher rate with an aggravation of expenses that will burden the budgets of European companies that may resort to staff cuts or decrease in production.

The consequences of this new macroeconomic picture

The upcoming quarterlies will not only give an important signal about the health of companies and the influence of inflation on them, but will also test the pulse of this change in exchange rates between major currencies.

“A weak euro is thought to be a good thing for exports. But now it is considered a bad thing. Because it adds to price pressures such as imported inflation: something absolutely undesirable for the ECB”.

According to some analysts, the single currency could even fall below parity if the current Nordstream1 pipeline blockade is not reinstated, leaving the old continent without heating with winter only two months away.

On the crypto side, BTC, which tends to follow the trend of the dollar, could benefit from this situation and offer an alternative to the dollar as a safe-haven asset.

The rest of the cryptocurrencies could also benefit from this change, but as of yet, the prices do not seem to be performing in this direction.

The post Euro-Dollar parity has been reached appeared first on cryptodailynews24.com.