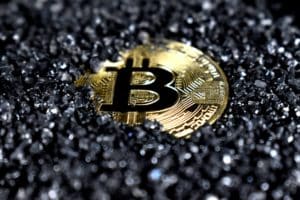 With concerns regarding the health of the stock-to-flow bitcoin price prediction model, as well as fears over a potential “miner capitulation” event, debate over whether the bottom is in has returned to Bitcoin Twitter.

Uncertainty in the air certainly seems reasonable. After all, in recent weeks Binance has  temporarily paused bitcoin withdrawals “due to a stuck transaction causing a backlog.” At first, Binance founder and CEO Changpeng Zhao said in a tweet that the issue would be resolved within 30 minutes. But, he later amended his timeline, saying, “Likely this is going to take a bit longer to fix than my initial estimate.” Around 11:30 a.m. ET Wall Street time,  bitcoin withdrawals had resumed. In the interim, many in the Bitcoin community held its breath.

It marked the continuation of a turbulent time for Bitcoin, which fell from approximately $32,000 down to $23,000 in just one week. Ultimately, the price of Bitcoin could go as low as $12,000, which would be a measured move dating back to 2019 prices.

Some traders will begin buying again around $20,000, which could for a time act as a support. Don’t expect institutions, however, to step in and prop the market up. Due to the structural issues in crypto markets (and the broader economy generally), they won’t enter until $10,000-$15,000 BTC, which is where they entered during the pandemic. Bitcoin ultimately fell to $3,000 back then. The financial world is in risk aversion mode. Investors lack the capital and/or risk tolerance to step in.

If investors are cutting back risk by dumping stocks like Tesla and other stocks, they are not going to enter into Bitcoin, which quite frankly has acted like an equity in the midst of unrelenting quantitative easing and low interest rates, but could ultimately act like an inflation hedge/store of value if both of the following happens: people understand the implications of a finite asset based on energy expenditure, and internet connectivity continues to trend in the direction of the past 25-30 years. In this market, institutions won’t purchase something which has fallen by 20%. Hedge funds will wait for the collapse to enter. The Bitcoin market will have to unwind first.

Bitcoin has found a new base here of approximately $20,000, where the price could consolidate, bouncing between the $20-$25,000 range for a few weeks. Eventually, the price could fall quickly to $12,000 (or even $10,000), and the bear market will drag on. We could choppily move sideways for some time longer—say, between six months and two years.

What Does The Fed Do As We Enter Recession?

If inflation remains at 5%-6% (17% at ShadowStats), which it likely will for the duration of the summer, the Federal Reserve won’t be able to print ad nauseum to alleviate the market conditions.  Since the Federal Reserve recently did as they indicated, which was to move interest rates to 50 basis points, Bitcoin still hovers around the $23,000 handle. Had they moved to 75 basis points, which was unexpected, the Bitcoin price might have collapsed further.

The stimulus programs in 2020 left the public flush with COVID cash. Much of that money went into stocks and crypto, which are now likely to experience a long-term bear market. The Fed claims it won’t step in with quantitative easing and zero interest rates. That could change, although inflation undermines the Fed’s ability to act. Furthermore, the political will for a spending bill doesn’t seem to be there. It’s a wake-up call to all.

Felix Mohr is a certified fintech professional from the University of Hong Kong, as well as the co-founder of MohrWolfe, a Bitcoin PR and communications services company.

The post The Bitcoin Price Could Fall To $12,000 appeared first on cryptodailynews24.com.