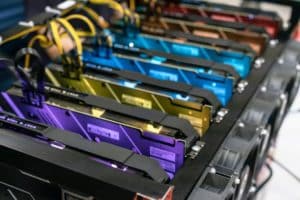 One of the main problems facing mining farms is that of heat generation.

Indeed, the machines that extract the hashes work continuously at maximum power, and they do effectively turn all the enormous amount of electricity they consume into heat. For this reason, farms are often placed in cold places, where there is sufficient outside air to reduce the temperature of the rooms in which they operate.

In the absence of fresh air, cooling equipment is used, which in turn consumes more electricity, driving up mining costs.

Mining farms in Texas suffer in the heat

The scorching Texas heat forces some mining farms to close

Obviously, this can be a problem in hot places where more cooling is needed by using artificial air conditioning systems, and is exacerbated when outside temperatures rise.

In addition, in case of heat waves spread over a large area, the population increases its electricity consumption due to increased use of home air conditioners, putting stress on the electricity distribution network itself.

This is what is happening in Texas, for example, where, as Bloomberg reports, almost all large mining farms have closed.

In that area, companies are preparing for an abnormal heat wave that could push the state’s power grid to near the point of collapse. In order to avoid the worst, it was decided to reduce all unnecessary industrial consumption of electricity, such as that of mining farms.

Texas is home to many mining farms, thanks to low energy costs and lenient regulations.

The president of the Texas Blockchain Association, Lee Bratcher, revealed to Bloomberg that as many as 1,000 megawatts are used for Bitcoin mining in the state. He also added that member companies of the Texas Blockchain Association have responded to the ERCOTs’ request by shutting down their machines to save energy. However, this is still only 1% of the total grid capacity for domestic and commercial use.

In reality, it is the miners themselves who find it convenient to turn off their machines momentarily, precisely because of the increased cost of conditioning the farms due to the heat wave.

Mining profitability after the market crash

It is worth noting that in recent months the profitability of BTC mining has plummeted by 80%, thus already making it unprofitable to mine during this period.

In fact, after the hashrate peak in early June, when a new all-time high was made, the current one is 24% lower. This reduction is certainly not just due to the temporary shutdown of machines in Texas, but reflects a global problem due to both the great heat spread somewhat throughout the Northern Hemisphere and the low value of BTC at this time.

In Texas last Friday, a new all-time record for electricity consumption was set, even after mining consumption was reset to zero, the situation is really at the limit. It is likely that similar situations are occurring in other parts of the world.