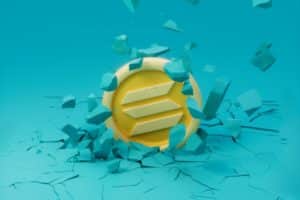 Solana at lows since July 2021

According to a report by Crypto Compare, Solana is one of the worst-performing cryptocurrencies in the first six months of the year.

Solana is among the worst-performing cryptocurrencies

Solana, like all other cryptocurrencies, loses a lot of ground, but is among those that perform worse

A report just released by Crypto Compare shows that the cryptocurrency market has continued to fall steadily and sharply over the past two months. The bankruptcy of the Three Arrows Capital fund, in particular, dragged down the prices during a strongly negative month of June, in which the two main cryptocurrencies ETH and BTC fell -44.9% and -37.4%, respectively.

This was also driven by increased volatility in all financial markets starting with the US listings. However, in the cryptocurrency markets this volatility has been felt much more strongly. In the past three months, all digital currencies have lost more than half of their value, with BTC being the “best performing” and SOL suffering the most – down 72.5% to $33.74.

ETH is one of the cryptocurrencies that is suffering the most from this negative period, registering a decline of 67.4%, while XRP and Cardano, also among the top 10, dropped -59.2% and -59.7%, respectively.

Particularly negative, as mentioned above, was the performance of Solana, which was considered until last year to be one of the most attractive cryptocurrencies with the best growth possibilities in the entire digital asset landscape. The total value locked (TVL) on Solana‘s blockchain fell 37.3% in June to $2.50 billion, the lowest monthly close for the blockchain since July 2021. The SOL token was one of the worst ever, having fallen 80.1% since the beginning of the year.

Movements in the crypto market and DeFi in particular

As a result, fees paid on transactions also dropped consistently, which in June decreased compared to May by 28.7% to $11.5 million, the lowest level since April 2020.

Some positive signs can be seen from the DEX Uniswap, which entered the top 5 protocols for TVL in June. In the same month, daily rates for Uniswap surpassed that of Ethereum, peaking at $8.36 million on 15 June.

Bitcoin’s Lightning Network also rose, continuing to increase by 4.08%. Total fees paid on transactions decreased 28.7% to $11.5 million, and the average fee per transaction also fell from $2.01 in May to $1.54 in June.

The average fee on Ethereum transactions fell to $6.93, the lowest level since July 2021. Fees had peaked in July 2021 thanks to the boom in DeFi and NFTs. While in these early months of the year, they fell precisely because of the downsizing of both markets.

The post Solana at lows since July 2021 appeared first on cryptodailynews24.com.