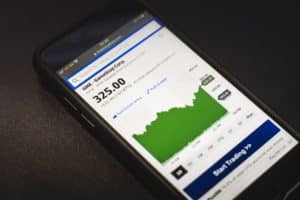 GameStop will pay a dividend for every 4 shares owned

The gaming company, GameStop, will resume paying dividends after a 3-year hiatus, and it is doing so using the four-to-one ratio share formula.

GameStop gets back on track and will start paying dividends again

Yesterday morning, the gaming company’s board of directors surprisingly announced its intent to start paying dividends to its shareholders again.

But this time the GameStop company will pay a special dividend: there will be no cash compensation, but instead the premium will be stock.

To understand why the company is resuming with dividend payments, and why in shares, we need to take a look at what it has done in the past.

The company, unlike many competitors in the sector, used to pay dividends to shareholders on an annual basis until 2019.

The premiums paid were between 7% and 13% and were in fiat currency.

The company, founded in 1984, has almost forty years of history behind it and its stock value was always under $10 ($4 to $20 per share) until January 2021, when thanks to the forum on Reddit r/WallStreetBets a huge support campaign began for the stock that led to one of the biggest manipulations in Wall Street history.

Within a month GameStop’s stock went from the above value to $350/400 changing this company forever.

Meanwhile in August 2021, Michael Burry entered the company by taking over 13% of it.

The investor’s move, as explained by his statements at the time, was to breathe new life into the company to compete with other giants such as Amazon and Alibaba by expanding its services and potential.

With a worldwide capillary network of 5500 physical stores, the company would be better positioned in logistics and direct sales and would be able to erode margins from competitors.

During the two years of the pandemic, the company was forced to temporarily close its stores, incurring huge financial losses, but now it seems to have recovered.

The close of trading on 21 July 2022 is the date specified by the gaming company for payment of the bonus to shareholders, and it will be possible to trade the bonus from the next trading day.

How Gamestop is performing on the stock market today

At the same time, the development of the company’s own NFT store is proceeding.

The store is in partnership with Immutable X and will be stocked with $150 million in IMX tokens.

Another step toward broadening the commercial offering and toward that competition with Amazon and Alibaba that Michael Burry is pushing for is Very Mobile.

The company under CK Hutchison Holdings is landing in GameStop stores, and its sim cards will now be marketed at all the video game chain’s stores.

The post GameStop will pay a dividend for every 4 shares owned appeared first on cryptodailynews24.com.