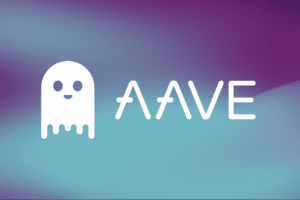 Aave wants to launch its own stablecoin: GHO

The Aave platform has issued a proposal stating it wants to launch its own protocol-native stablecoin.

Aave’s proposal regarding the stablecoin project

Aave is one of the largest DeFi protocols in the Ethereum ecosystem and fights on the podium with MakerDAO and Uniswap. It currently sits in third place with a TVL of $5.4 billion, according to DeFi Pulse data.

Apparently, it now appears that Aave wants to launch its own native stablecoin that is first and foremost dollar-linked, decentralized, and collateral-backed.

The leaked name is GHO, and, according to what has been said so far, it appears that it will be an algorithmic stablecoin collateralized on-chain.

The news came yesterday afternoon from the Twitter account of Watcher.Guru, one of the largest crypto and blockchain world news aggregators:

JUST IN: #AAVE has submitted a proposal to create a native, decentralized, collateral-backed stablecoin, pegged to the USD.

The comparison immediately appears direct. The challenge is clearly issued to the Maker protocol, with which it continues to contend for first and second place.

Maker’s algorithmic stablecoin, DAI, has become an important benchmark in Ethereum’s DeFi and, thanks to its complex infrastructure, boasts that it has never lost the peg to the dollar.

With the launch of GHO, Aave could nibble away a significant portion of its No. 1 competitor’s market share, should the project prove successful.

How the GHO stablecoin will be structured

GHO is coming, the new algorithmic stablecoin on the Aave protocol

Aave Companies made the communication as a proposal to the protocol’s DAO. The document is detailed with every particular for both novices and experts.

The first information is common to major algorithmic and decentralized stablecoins, especially DAI. In fact, GHO will be able to be minted behind the escrow of collateral, which can be chosen from a diverse set of cryptocurrency assets.

These are the main features that any self-respecting decentralized stablecoin should have:

The two properties just mentioned are indeed a fundamental and necessary part of the infrastructure so that the project can be sound and sustainable in the long run.

There is one feature, however, that looks very interesting and does not seem to be common to other Lending & Borrowing platforms, at least so far.

Users who wish to borrow, in fact, can continue to earn interest on the asset deposited as collateral.

The proposal was shared yesterday and is now only in the process of awaiting community approval. Should the DAO vote in favor, the Aave platform will implement the stablecoin into the protocol. Initially, interest rates deemed appropriate will be applied, but these can still be changed over time.

User responses under the proposal

Some users responded enthusiastically; others, however, were somewhat doubtful. The following comment, including the moderator’s related response, certainly appears to be among the most constructive:

Can someone please outline the key differences between DAI (by MakerDAO) and GHO and why would someone uses GHO over DAI for example?

Thanks, love to learn more.”

“[…] The power of DeFi is that GHO allows more liquidity for decentralized stablecoin in the market, more fees for Aave, more volume and fees for Curve, more stability for other stablecoins and more attractiveness of DeFi in general compared to CeFi.

With GHO Aave wins, but also curve, balancer, convex, makerdao, qidao, frax and so on…

The post Aave wants to launch its own stablecoin: GHO appeared first on cryptodailynews24.com.