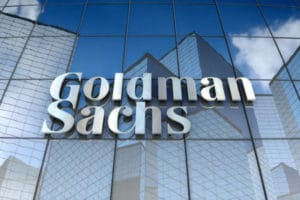 Goldman Sachs is no stranger to taking an interest in crypto, it had done so before and probably alongside Barclays is the financial institution of global reach that has taken the most interest in digital currencies over the years.

In March 2021, the investment bank had already shown the extent of its interest in Bitcoin by taking an interest in OTC transactions.

Essentially, the institution had taken an interest through one of its ad hoc teams in studying an over-the-counter (OTC) crypto instrument.

As reported at the time of the events to CNBC, through the most classic example of decentralized finance (DeFi), Goldman had made a purchase transaction through the crypto bank Galaxy.

However, the interest in Bitcoin and cryptocurrencies as a whole dates back a long way, the investment bank’s first transactions in this asset go as far back as 2020.

Tuesday was the turn of Goldman‘s first Bitcoin futures transaction in Asia, a very important move both in terms of timing and the transaction itself.

In this period, the cryptocurrency world has experienced several shocks such as the Terra-Luna ecosystem debacle, which saw the value of a stablecoin linked to the dollar price that everyone considered safe collapse to zero, or what happened to Celsius and some crypto exchanges that had to block operations because of problems related to lack of liquidity.

The fact that such a major bank continues to invest with increasing vigor in this asset is a very good sign for digital currencies because it increasingly normalizes this sector and exposes banks that will thus have an interest in no longer acting as detractors.

As reported by Bitcoin Magazine, yesterday GFI Security arranged the first block trade with brokerage of Bitcoin options contracts by CME Group Asia and Goldman Sachs traded much of it through crypto bank Cumberland.

In its annual report last month, Goldman Sachs noted how both political institutions and investment banks are overall showing a steady and increasing openness to crypto assets.

The blockchain technology that underpins this world is universally recognized as an innovation that is changing and will change both finance and many other industries over time, and as a result people are increasingly looking to interact with it rather than fight against it.

“We are delighted to partner with Cumberland and Goldman Sachs to execute the first listed cryptocurrency futures and options block trade via CME Group in Asia. This transaction marks BGC’s continued commitment to expanding our cryptocurrency offering and to working with our global counterparties in developing this rapidly evolving asset class”.

This is according to Brad Howell, managing director of Asia Pacific for BGC.

Paul Kremsky, global head of Cumberland, intends to expand the company’s potential by growing it as an intermediary for banks and the crypto world.

“Since Cumberland DRW first established an OTC cryptocurrency desk in 2014, the goal has always been to help usher institutions into the digital assets space”.