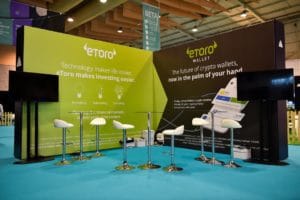 eToro will no longer be listed on the stock exchange, for now

Yesterday, FinTech Acquisition Corp. V announced that it will no longer take over the exchange and social trading giant, eToro, thus putting the brakes on its stock market entry.

Negotiations for the SPAC had begun a year ago and had seen the platform’s valuation at $10 billion.

A SPAC, which stands for Special Purpose Acquisition Company, is an alternative to an IPO for a company to go public. It makes use of an investment vehicle in order to minimize costs, as opposed to an IPO process, and to access capital from the stock market.

The FinTech Acquisition Corp. V is a SPAC and just as the name suggests, it has the sole purpose of acquiring companies in the fintech world that want to enter the stock market.

FinTech V is listed on the Nasdaq under the ticker FTCV and last year had struck a deal with eToro valuing it at $10 billion.

In this way, the trading platform was going to join the SPAC with an independent ticker and its stock would be publicly traded and also listed on Nasdaq.

“eToro continues to be the leading global social investment platform, with a proven track record of growth and strong momentum. Although we are disappointed that the transaction has been rendered impracticable due to circumstances outside of either party’s control, we wish [CEO] Yoni and his talented team continued success”.

eToro‘s goal was to have a new source of access to capital by issuing new shares in the market. In this way, eToro could fuel the growth and expansion of its business, increasing its global market share and establishing its brand as a provider of innovative financial services.

The current financial condition of eToro

The failure of the deal can be subjected in large part to the collapse of the crypto market, which has brought so many entities to their knees, such as Celsius, 3AC, and BlockFi.

In fact, eToro is heavily exposed to the cryptocurrency market, which has grown its business and user base by leaps and bounds. It is enough to think that about 70% of total trading fees come from crypto themselves.

A private capital injection is currently being sought to address the current financial difficulties. This funding is expected to be in the range of $800 million to $1 billion. The current value of the social trading platform is $5 billion, 50% less than what FinTech V estimated a year ago.

In this regard, they have already considered laying off 100 employees, equivalent to 6% of total human resources, in order to stay afloat.

Be that as it may, this does not detract from the fact that in more favorable market conditions, eToro may reconsider making a comeback and listing its stock on the stock exchange.

Yoni Assia, CEO and co-founder of the Israeli crypto exchange, is keen to reassure the community despite the difficult period:

“Our balance sheet is strong and will continue to balance future growth with profitability. We ended Q2 2022 with approximately 2.7 million funded accounts, an increase of over 12% versus the end of 2021, demonstrating continued customer acquisition and retention rates that have been improving over time”.

The post eToro will no longer be listed on the stock exchange, for now appeared first on cryptodailynews24.com.