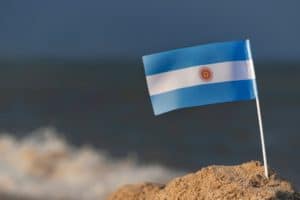 Citizens in Argentina appear to be relying on stablecoins in anticipation of the collapse of the national fiat currency Argentine peso. The main cause of this event is political-economic uncertainty that is driving up inflation and devaluation of the local currency.

Argentina relies on stablecoins because of the political-economic situation

According to reports, it appears that Argentina is relying on stablecoins and foreign currencies because of a major devaluation of its national fiat currency, the Argentine peso, caused by political-economic uncertainty.

In fact, it appears that the dollar-peso exchange rate has plummeted mainly due to the resignation of Economy Minister Martin Guzman, one of the architects of the country’s agreement with the International Monetary Fund (IMF) aimed at restructuring the debt the country has with the organization.

Here is the announcement on Twitter with attached photo showing Guzman’s resignation letter.

“With deep conviction and confidence in my vision of what path Argentina must follow, I will continue to work and act for a more just, free and sober homeland”.

Argentina and the increased trading volume of stablecoins

These chain resignations led the price of stablecoins to rise 11% on some crypto-exchanges, while the exchange rate between pesos and US dollars reached record highs.

In fact, according to data from Cryptoya, the cost of buying Tether (USDT) in Argentine pesos (ARS) was 271.4 ARS through the Binance crypto-exchange, a jump of +12% from before the resignation announcement and 116.25% from the current fiat exchange rate of USD/ARS.

Inflation is also another cause that has led Argentina to increase crypto adoption.

In May, Americas Market Intelligence (AMI) reported data in this regard showing the huge growth in cryptocurrency adoption in the South American country, doubling countries such as Peru, Bolivia, and Mexico.

Not only that, Argentina also ranked tenth in the Global Crypto Adoption Index ranking for that period by the company Chainalysis.