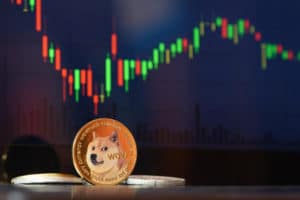 Dogecoin: 62% of traders are long

The majority of open positions on crypto exchanges on the price of DOGE (Dogecoin) are long.

Traders are confident about the future of Dogecoin

This is evident from Coinglass’ LongShortRatio chart according to which 62% of positions would be long right now.

A long position is a form of betting on the increase in the price of the asset underlying a futures contract. In this case we are talking about futures contracts on Dogecoin.

The ratio of short to long positions varies continuously, and the Coin Glass chart is updated every 5 minutes.

In the morning the long positions fell as much as 15%, but later rose again.

In fact, over the course of the day, the price of DOGE is up, with a gain of 3% over yesterday.

Taking only daily changes into account, however, yesterday’s day closed with just over 50% long positions, and it has been since the beginning of June that more or less this percentage has hovered around parity with the short ones.

This is somewhat surprising, because during the last 30 days the price of DOGE has fallen by 15%. The biggest drop was between 10 and 13 June, but even on those days the percentage of long positions remained just under 50%. By contrast, there were more than 52% short positions on 8 June, which was two days before the collapse.

The fact that the percentage of open long positions never fell that far below 50%, even during the collapse, and now exceeds 50%, really makes one believe that the markets as a whole are more positive than negative about DOGE in the short term.

It is worth noting that these are also very similar percentages for open positions on Bitcoin, although on BTC the lowest peak this past month was on 12 June with almost 52% short positions.

It is worth mentioning that these percentages in the short term are highly influenced by price trends, because futures trading is primarily used by intraday traders and speculators, who are not interested in long-term dynamics.

However, from the fact that they are all very close to 50% for now, it can be inferred that this is by no means a time of volatility, and perhaps the speculators themselves are not expecting a significant increase in volatility anytime soon.

Then again, there was already a lot of volatility in the crypto markets in June, so it is plausible that we are now heading for a period of relative calm. It remains to be seen how long this phase of subdued volatility will last, not least because much of this volatility actually stems from global financial markets, which are plagued by numerous fears about the future.

Dogecoin being treated by traders in a similar way to how BTC and ETH are treated gives the idea that at this time there is not much news expected on the horizon, in the short or very short term.

The post Dogecoin: 62% of traders are long appeared first on cryptodailynews24.com.