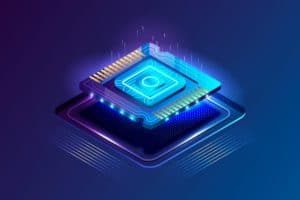 For some time now, the South Korean phone company, Samsung, had already revealed initiatives in the blockchain world, but it is now news that it is also starting to produce 3-nanometer (3nm) chips for crypto mining.

The new microchip signed by Samsung for crypto mining

Samsung is currently reportedly in a testing phase, and the first customers to purchase these chips have already been revealed. These are PanSemi, a Chinese company that produces ASICs, and also the Qualcomm company.

Qualcomm, Samsung’s largest customer, had also booked the trial, and the two parties have agreed that the US company can request the trial at any time, sources said.

These 3nm GAA (Gate All Around) processors from Samsung will have gates on all four surfaces. This is a novelty since the processor that is currently considered the most advanced would be FinFET, which uses three surfaces.

As a result, Samsung’s model would allow more precise control of currents, but with a smaller size than competitors, as explained by the news source, The Lec.

In reality, this news has been rumored for some time given that already during the first-quarter conference call, Samsung stated that it would be the first in the world to produce 3nm GAA.

Samsung in the blockchain and crypto world

As mentioned, this is not the first time the phone giant has launched products related to the cryptocurrency world.

In fact, back in February Samsung decided to launch NFTs, freely distributed to those who bought the new Galaxy S22 model. In the world of Non-Fungible Tokens, Samsung had decided to integrate an NFT platform into three TV models to allow digital artworks to be traded from the TV and, of course, easily put on display.

In the past, Samsung had also partnered with Stellar to create new blockchain applications compatible with their store, the Keystore. And indeed there were lengthy discussions a few years ago about the famous Blockchain Keystore, a system that ensured that Samsung smartphone holders could safely handle blockchain and cryptocurrency-related apps and dApps.