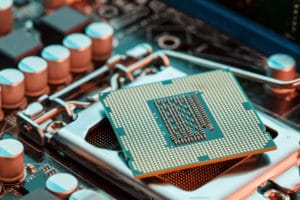 All set for the launch of the new ASIC for Bitcoin mining by computing giant Intel.

The ASIC for Bitcoin mining developed by Intel

Everything is now ready for the new ASIC that Intel unveiled last April for Bitcoin mining. It is called Blockscale and is Intel’s new cryptocurrency mining program.

The new ASIC will be ultra-low voltage and high power efficiency, which will provide an important new tool for Bitcoin mining. Raja Koduri, senior vice president of Intel, said while introducing the new product:

“We expect that our circuit innovations will deliver a blockchain accelerator that has over 1000x better performance per watt than mainstream GPUs for SHA-256 based mining”.

Balaji Kanigicherla, vice president and general manager of Intel’s blockchain unit, on the other hand, emphasized the important sustainability features of the new ASIC chip:

“Intel’s decades of R&D in cryptography, hashing techniques and ultra-low voltage circuits make it possible for blockchain applications to scale their computing power without compromising on sustainability”.

Details about prices are not yet known, but according to rumors they are expected to be very competitive.

The launch of the new product on the market

In April, Toronto-listed cryptocurrency mining company Hive Blockchain technologies said Intel‘s new mining chips have the potential to increase the company’s hashrate by up to 95%.

“The Intel Blockscale ASIC’s specs only apply to one unit of the silicon itself, rather than potential output of a fully built system. Typically, mining systems include hundreds of ASICs enabling a much higher hashrate at the system level”.

Each Blockscale ASIC chip will provide up to 580 gigahash per second (GH/s) of hashrate with up to 26 joules per terahash (J/TH) of energy efficiency and will support up to 256 ICs per chain, as well as on-chip temperature and voltage sensing capabilities.

The post Intel launches its ASIC for Bitcoin mining appeared first on cryptodailynews24.com.