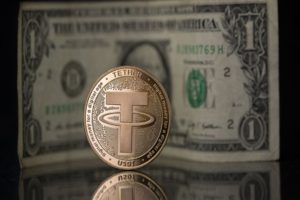 Tether attacked during the implosion of Terra

During the implosion of the Terra ecosystem, the cryptocurrency Luna and the stablecoin UST, some hedge funds bet big on USDT imploding as well.

This was confirmed yesterday by Tether‘s CTO Paolo Ardoino, saying that in particular the USDT/USD perpetual futures exchange pair was targeted.

Ardoino himself supports the hypothesis, circulating from the outset, that what triggered the implosion of Tether was a coordinated attack, with “troll armies” with which some hedge funds were trying to cause further panic in the crypto markets after the collapse of Luna, via a new wave of FUD.

This new wave was directed against USDT.

Taking the UST/USD and USDT/USD trading pairs as reference, it becomes apparent that the real implosion of UST began on 9 May, and ended on 13 May when the peg with the dollar was now clearly irretrievable.

In contrast, for USDT the problems related to the peg began on 11 May, reached their most acute phase on 12 May, but by the 13 they had already been completely resolved.

Ardoino says that the hedge funds that attacked USDT believed and supported all the various FUD spread about Tether in recent years, namely the assumption that it was not 100% hedged, that it had exposure to Evergrande and the Chinese CP, and that it had issued tokens out of thin air, that it gave loans without collateral. He also claims that these narratives were produced by some competitors who were spreading them through coordinated troll networks.

USDT on the other hand, until proven otherwise, is backed 100% by US dollars or equivalent, “has never failed a redemption”, and all redemptions are repaid at par with the dollar.

“In 48 hours Tether processed 7B in redemptions, averaging 10% of our total assets, something almost impossible even for banking institutions.

In more than one month Tether processed 16B in redemptions (~19% of our total reserves), again proving that our operations, portfolio, banking infrastructure and team are solid and battle tested”.

He also points out that while FUD targeted Tether, whereas it was discovered during the last 2 months that:

“Many lenders and hedge funds considered the holy heroes of our industry were actually taking risks that Tether never touched even with a ten foot pole”.

The reference, of course, is to Celsius, 3AC, and other similar operators who were considered solid and turned out to be so weak that they failed claims.

Tether therefore survived an attack that succeeded in putting UST out of business, while other entities imploded simply because of difficult market conditions.

The post Tether attacked during the implosion of Terra appeared first on cryptodailynews24.com.