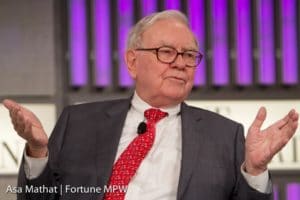 Warren Buffett, father of value investing, does not believe in the value of Bitcoin

Bitcoin is not well seen by Warren Buffett’s expert eye

In a special report in Milano Finanza, the Oracle of Omaha lashes out at BTC, accusing it of not generating value and therefore not having any.

In no uncertain terms, the financial shark explains that it is precisely the lack of a product that determines his misgivings about Bitcoin and its algorithm.

The tycoon explains that although for all intents and purposes it is considered a currency, it does not generate value:

“If the people in this room owned all of the farmland in the United States and you offered me a 1% stake for $ 25 billion, I would write you a check right away. If you owned 1% of the apartments in the United States and offered it to me. for another 25 billion dollars, I would write a check for that too. If you owned all the bitcoins in circulation in the world and you offered them to me for 25 dollars, I would not buy them. Because I don’t know what to do with it. The price of bitcoin depends on the fact that the next you pay more than the previous”.

A piece of land has it, a building has it, a monument has it, but not Bitcoin.

With this simple metaphor, Buffett explains the concept that if something does not generate value consequently it has none, and BTC is no exception.

Thereafter, in a turn of phrase, the investor attacks the asset by pointing to it as a substantial scam (without ever saying so directly).

He evokes episodes such as the story of Ponzi and his scheme and Madoff, but without ever naming names though hinting at it.

According to Warren Buffett:

“Anyone who thinks the US accepts anything other than the dollar as a means of payment is out of their minds. These currencies do not multiply and produce nothing. There is a kind of magic associated with cryptocurrencies. But in the history of Wall Street. other people connected magic to things”.

For Warren Buffett, cryptocurrencies are likened to a huge pyramid scheme

Hence the allusions to Ponzi and his scheme that over time have been unmasked but have done extensive damage and are cyclically resurrected to scam other investors.

NFTs have not escaped criticism either, and although he never mentioned tokens, he said:

“There are also other things that do not produce something tangible but have value. For example, a painting, if painted by a fairly important artist, could be worth something. If someone wants to sell you a pyramid, this too has value because in the time will attract tourists”.

In short, praise for art in all its forms as long as it is tangible and attainable so as to generate profits from its exploitation as is done in museums or art cities or for mere collecting at auctions.

The post Warren Buffett against Bitcoin appeared first on cryptodailynews24.com.