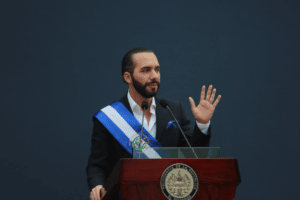 The President of El Salvador reassures the Bitcoin community

El Salvador’s exposure to Bitcoin is very high indeed and the collapse of its value is generating panic among the community.

On Saturday 18 June, BTC broke the $20,000 support, a level that represents a very critical psychological threshold for investors.

For many analysts, this can only mean the beginning of the collapse, which could turn into one of the most catastrophic bearish phases ever.

However, the President of El Salvador does not appear worried at all. On the contrary, a hint of irony can also be seen in his tweet:

I see that some people are worried or anxious about the #Bitcoin market price.

My advice: stop looking at the graph and enjoy life. If you invested in #BTC your investment is safe and its value will immensely grow after the bear market.

Patience is the key.

It is nothing new that losing millions of dollars in a few days generates anxiety and concern. But Nayib Bukele, from the height of his immense knowledge, recommends staying calm:

“Stop looking at the graph and enjoy life. If you invested in #BTC your investment is safe and its value will immensely grow after the bear market.

Patience is the key”.

The President’s comment generated divergent reactions among the community: there are those who remain optimistic, seeing an opportunity, and those who turn their noses up at these “recommendations” seemingly devoid of logical sense.

The first response is that of Alistair Milne, who sees this as a good time to launch the long-awaited Bitcoin bonds:

If I might make a humble suggestion. Great time to launch your #Bitcoin bonds

The second is that of the famous Peter Schiff:

That advice is as bad as your advice to buy the top. How can you say an investment in #Bitcoin is "safe' when it has already lost 75% of its market value? You have no idea how low the price will fall during this bear market, or that the price will ever recover to current levels.

His comment, which appears to be driven more by a logical and rational sense, certainly makes one reflect on what has been happening in the markets over the past period.

The complicated relationship between the country of Nayib Bukele and Bitcoin

Citizens are beginning to fear what the consequences of a further market crash might be, driven primarily by strong negative returns on Bitcoin. Any investor with a modicum of basic knowledge knows that a lack of diversification is always a big mistake in risk management.

El Salvador made Bitcoin legal tender on 7 September 2021, when it was worth $50,000. A few months later its value touched the ATH of $69,000, generating immense confidence in the country’s choice.

This confidence then began to wane after the last purchase of 500 BTC last May. The price was around $30,000 and the transaction, which only increased exposure to Bitcoin, was signed with the famous “Buy the dip“.

El Salvador is currently at a loss of around $40 million, but Alejandro Zelaya, the country’s Finance Minister, denied these allegations, stating:

“I have said it repeatedly: A supposed loss of 40 million dollars has not occurred because we have not sold the coins”.

Based on this response, it is arguable that he is right. Indeed, the loss has not yet occurred, but it certainly puts a strain on the overall health of the country’s economy.

The post The President of El Salvador reassures the Bitcoin community appeared first on cryptodailynews24.com.