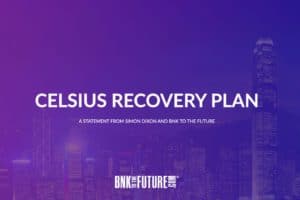 Celsius: a rescue plan similar to that of Bitfinex

Celsius‘ lead investor, BnkToTheFuture, via its co-founder, Simon Dixon, has proposed a rescue plan similar to the one used in 2016 to save the Bitfinex exchange.

Celsius Recovery Plan – A Statement From our CEO @SimonDixonTwitt & Bnk To The Future https://t.co/IYvGIw3Dp0

At that time, Bitfinex suffered a colossal theft, but eventually managed to save itself and continue operating, so much so that it is now one of the leading exchanges in the crypto world.

Dixon himself, in the post describing the solution, included a video from 2017 explaining how Bitfinex was saved back in the day.

BnkToTheFuture tries to draw up a rescue plan for Celsius

1,039 BnkToTheFuture investors own shares in Celsius Network, which is why the CEO has taken action.

Dixon says that as a shareholder of Celsius, he wants to support the protocol by proposing a recovery plan also to avert a short-term systemic impact on the price of Bitcoin.

He explicitly mentions the plan with which Bitfinex recovered from the hack in 2016. BnkToTheFuture helped them recover through security tokens, debt and shares that offered potentially very high returns in exchange for high risks.

“I commit to supporting Celsius in any way that is useful”.

He adds that BnkToTheFuture has a platform and a team that can help Celsius out of this crisis.

At the moment, withdrawals on Celsius are still suspended, more than a week after the suspension, and the company has let it be known that they are also suspending AMA (Ask Me Anything) sessions and Twitter Spaces, in order to focus only on the recovery plan.

Possible solutions to the Celsius crisis

According to Dixon, traditional finance does not have any timely solutions to propose to Celsius, so much so that he believes that the current situation can only really be solved through the use of financial innovations. For example, the solution adopted with Bitfinex in 2016 allowed them to solve the problem in 9 months, and ended up working very well for their customers.

Of course, this is still a high-risk solution, and the outcome is by no means certain. However, if it takes its cue from a past case that has already been successfully solved, it might have some chance of repeating a similar success in the case of Celsius.

The situation therefore continues to be critical, but at least we are beginning to see some timid glimmer of a possible solution, albeit still very uncertain.

During the weekend, the crypto markets overall also seem to have ended their descent that began ten days ago, perhaps precisely because the panic is waning somewhat.

The post Celsius: a rescue plan similar to that of Bitfinex appeared first on cryptodailynews24.com.