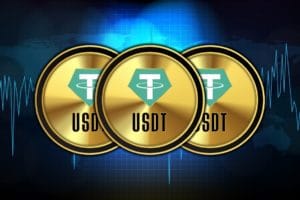 The market capitalization of USDT (Tether) has fallen back to October 2021 levels.

The all-time high had been reached in the days before Terra’s collapse, at $83 billion.

Given that the implosion of the Terra ecosystem was mainly caused by the collapse of their algorithmic stablecoin, UST, since those days there has been some fear in the crypto markets about the possible collapse of other stablecoins.

In particular, eyes have been focused on USDT, the world’s leading stablecoin, on which many doubts have been raised about the real reserves covering the tokens in circulation.

To be fair, for some time now there have been audits by independent companies certifying its 100% coverage, but many are still skeptical about this because they do not consider these companies to be particularly reliable.

In the first days following Terra’s collapse, USDT’s market capitalization dropped as low as $75 billion, and by the end of May it had fallen to $72 billion.

Fears related to another stablecoin, USDD, have rekindled over the past week, causing USDT’s capitalization to drop as low as $70 billion. The current level of $69 billion is not only 17% lower than just over a month ago, but is also the lowest level since mid-October last year.

USDD in particular is the algorithmic stablecoin of the Tron ecosystem and over the past week its value has fallen below parity with the dollar to a low of $0.96.

Currently, its market value has risen to $0.98, so it has not yet recovered all the peg.

The relationship between USDT and the major algorithmic stablecoins

The strange thing, however, is that both UST and USDD are algorithmic stablecoins, while USDT is a fully collateralized off-chain stablecoin. So it should be extremely unlikely that UST or USDD’s problems would cause USDT’s value to plummet. Indeed, Tether has never really lost its peg with the dollar, except in rare momentary cases, almost always recovered in less than 24 hours.

Moreover, USDT is now mainly used on Tron’s own network, so there would already be an alternative should USDD fail.

It is therefore possible that this dynamic is mainly due to the fear that has been plaguing the crypto market since Terra’s implosion, and not to rational technical reasons.

In contrast, USDC, the world’s second-largest stablecoin by market capitalization, has increased its own capitalization from $48 billion to $54 billion. Hence it is as if there has been a shift of capital from USDT to USDC.

Right now USDC’s market cap is only 21% lower than USDT’s, and if the current trend continues it is also possible that a historic overtaking will occur. Tether has always been the stablecoin with the largest capitalization on the crypto markets.

The post USDT: market capitalization down to October levels appeared first on cryptodailynews24.com.