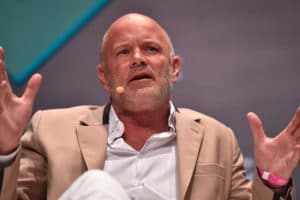 Mike Novogratz: we’re near the bottom

The CEO of Galaxy Digital says there has been a huge capitulation, and that the macro environment is still quite challenging, but perhaps the bottom is near.

According to Mike Novogratz Bitcoin is close to the bottom

Yesterday Mike Novogratz was interviewed by CNBC during the popular show Squawk Box.

During his speech, he stated among other things that the current price levels of Bitcoin should be near the bottom.

"We are going through what feels to be a little bit like a long term capital management moment in #crypto," says @Novogratz. "We've gotten to levels that I think should be close to the bottom." #bitcoin pic.twitter.com/0RU52qg1KJ

Novogratz compared the current Bitcoin price trend to that of the hedge fund Long-Term Capital Management, which collapsed rapidly in the late 1990s, creating negative consequences for the financial system, and was later rescued by the Fed.

“We are going through what feels to me a little bit like a Long Term Capital Management moment in crypto. It was the big hedge fund with all the leverage, and when it started unwinding, there was repercussions everywhere. We are seeing that in the crypto space right now”.

Novogratz in this regard cited Celsius, the crypto lending platform that has suspended all withdrawals since Monday, and also the collapse of the Terra project.

According to Galaxy Digital’s CEO, this situation is generating an accelerated reduction in debt, resulting in continued large-volume liquidations.

However, he believes that the bottom may be near for the price of Bitcoin.

Novogratz considers $21,000 for Bitcoin and $1,000 for Ethereum price levels close to the lows at this stage.

“There’s been a tremendous amount of capitulation and fear. Usually not a good area to sell, but it doesn’t mean we can’t go lower. I think the macro environment is still pretty challenging out there”.

He is referring to the situation in global financial markets, particularly those in the US where the risk of even tighter monetary policies and economic recession continues to linger.

The unstable macroeconomic environment does not help the cryptocurrency market

Hence, he by no means believes that the slump is over, but that the end of this downward phase may be near.

It is worth noting that the real collapse of the last five days yesterday seems to have momentarily stopped, but for now, there are no signs of a possible reversal in the short term.

It is worth mentioning, however, that a key level could be the $19,500 touched in December 2017 as the high of the previous cycle, and which has not yet been touched during the current collapse. Novogratz’s words seem to be compatible with considering $19,500 as the possible bottom at this stage.

However, Bitcoin has often accustomed us to swings that defy predictions, so it is not advisable to assume that the price cannot fall even below $19,500.

The post Mike Novogratz: we’re near the bottom appeared first on cryptodailynews24.com.