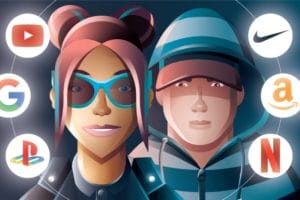 Children born between 1995 and 2010 will be the richest generation ever. By 2031, Gen Z will surpass the earnings of the Millennials and in the following years will multiply the figure fivefold.

The buying habits of Gen Z analyzed by Rave Reviews

The chart highlights the values ​​and ideals followed by Gen Z

Rave Reviews has come out with an infographic in which it analyzes the spectrum of trends and conformation of the so-called Generation Z (i.e. young people born between 1995 and 2010) with a special focus on how and where they spend their income.

The first striking fact is that not only will this generation surpass the previous one in absolute wealth by 2031, but that it already has a spending power of 143 billion dollars a year and influences its household by a further $127 billion of annual spending.

The catch-up between the purchasing power of one and the other generation will take place by 2031 if the current rate of income growth of Generation Z is confirmed. This means that in eight years those born between 1995 and 2010 will quintuple their income.

So far we have seen enormous achievements by this generation, but how is it structured and what are the characteristics of this cross-section of society?

40% of American companies are made up of this extraordinary generation and this says a lot about the health of the US, which seems to be in good shape for the future.

Gen Z is a very cosmopolitan cross-section. It is enough to think that 48% of it is non-white and 22% have at least one immigrant parent, compared to 14% of the previous generation.

Diversification not only concerns ethnic origins, but also touches on culture and personal tastes.

Added to this record is that of being a very open generation in which the LGBT+ community represents one-fifth of the total and 35% of it prefers neutral pronouns to gender pronouns.

The generation that fights for ethics and political correctness

Openness to the other and diversification, when combined with a propensity to save raw materials and a strong desire for a greener and more ethical world, make them a model generation from a human point of view.

The most inflated socials give way to other platforms and so it is that among those favoured by these users are Fortnite, Twitch, Roblox, TikTok, Instagram and YouTube, but also Snapchat and Discord.

These platforms have been helped in recent years by the most popular artists of this generation and this has contributed to their popularity, along with the fact that they use a smarter and faster language than the outdated Facebook for example.

Among the most popular brands are those with a more gender-free vision, aimed at saving money and having less impact on the environment.

Young people say they are even willing to pay 20% more, or up to twice as much in some cases, to buy something with the same vision as them.

Among the favourite brands are Nike, Walmart, Oreo while the podium for entertainment is made up of Google, Netflix and YouTube.

The post Gen Z will be the richest ever according to research by Rave Reviews appeared first on cryptodailynews24.com.