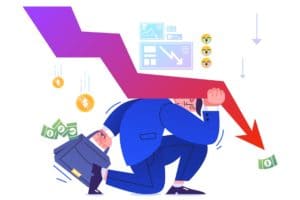 Losses of over $1 billion for MicroStrategy

The latest heavy crashes of the crypto market and Bitcoin, which slipped to $22,000 in the last few hours, have certainly taken a heavy toll on the world’s biggest Bitcoin investors, one of which is the MicroStrategy fund.

According to the latest rumours, the net loss on the BTC investment by the Californian fund led by Michael Saylor would have exceeded $1 billion.

JUST IN: Michael Saylor’s MicroStrategy #Bitcoin investment is currently at a $1,000,000,000 unrealized loss.

But all this does not seem to worry the CEO at all, who on Monday afternoon, right at the height of Bitcoin’s difficulties, changed his profile picture on Twitter. The photo depicts himself with lasers shooting out of his eyes. Self-portraits with laser eyes are a sign in the world of cryptocurrency backing Bitcoin. Saylor posted the new profile picture a few hours after tweeting “In #Bitcoin We Trust”.

According to the latest data published by the SEC, the company had 129,218 BTC as of 31 March, at a value of around $4 billion, for an average price of around $31,000. After the new Bitcoin collapses, the countervalue is around $3 billion.

In addition, the company is in a very delicate situation because if the price of Bitcoin falls below $21,000, MicroStrategy will have to settle a margin call and will have to provide additional collateral in Bitcoin for a $205 million loan it took out with Silvergate Bank in March.

All this literally caused MicroStrategy’s price to plummet, which lost 25% on the Nasdaq on Monday, to $152.15 a share. The company’s shares have become highly correlated with Bitcoin, especially since CEO Saylor said he would add the digital currency to his balance sheet in August 2020. According to the CEO, this would serve as a hedge against inflation.

It is hard to understand the strategy of the company led by Saylor, who has used market downturns to buy Bitcoin again. But at this stage, with the risk of a margin call on the newly obtained loan and with stocks plunging on the stock market, it becomes really difficult to be as optimistic as Saylor seems to be.

The post Losses of over $1 billion for MicroStrategy appeared first on cryptodailynews24.com.