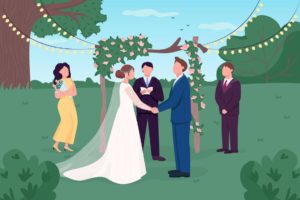 Kevin-Prince Boateng and Valentina Fradegrada get married in the metaverse

It is fair to say that the wedding of Prince Boateng and Valentina Fradegrada was, in all respects, a unique wedding. A celebration that concretely demonstrated how much the web and consequently our lives are changing.

The metaverse wedding between Boateng and Fradegrada

Boateng and Fradegrada celebrate their wedding also in the metaverse

For Prince and Valentina it was love at first sight, the wedding proposal had already arrived last 6 December, only 4 months after their first date!

Right from the start, the couple had announced that they wanted to hold two ceremonies, the first more classical/traditional and the second in the metaverse.

The request to get married in the phygital world came from the bride herself. Valentina, in addition to being a martial arts champion, has for some time been working on the great Over project, a platform super suitable for hosting events.

According to statements by the former Barcelona footballer, it seems that the idea was a mutual one.

Prince had in fact stated:

“I wanted to do something special for Valentina, something no one had ever done and thanks to OVR, we can celebrate our love like no one has ever done before, in an innovative way”.

An NFT created to attend the event

The phygital venue where the footballer and the martial arts champion got married was designed and created especially for the occasion by the OVR team.

In order to be able to attend the ceremony, guests had to buy an NFT minted especially for the occasion on OpenSea.

Prince Boateng and Valentina Fradegrada’s was certainly an unconventional wedding that raises the question of what lies ahead in the near future. Our everyday life will most likely be extremely different from what we experience today.

The post Kevin-Prince Boateng and Valentina Fradegrada get married in the metaverse appeared first on cryptodailynews24.com.