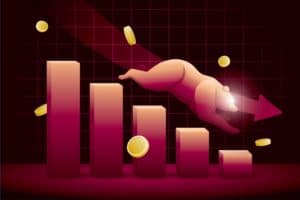 Crypto market and equities in the red

During Monday’s session, the stock market continued to lose ground in the wake of a period that was not exactly one of the best. Stocks that are correlated in some way with crypto suffered the most.

The whole market has entered a strong bear phase

After a very turbulent day, the New York exchange continues to turn red.

The global situation continues to weigh on the markets and as a result, fears of war, the energy crisis and inflation have managed to plunge the stock markets again, particularly the American one.

The latest inflation figure is 8.6% which is a real record, having never been so high in the last 40 years.

The exposure to cryptocurrencies of some stocks or just dealing with them even marginally does not help stocks.

Stocks that have crypto on their balance sheet and have to do with the blockchain have been heavily penalized, Elon knows something about this, seeing his Tesla (TSLA) close with -7.10%.

It has become noticeable how the prices of cryptocurrencies collapse or when the market capitalization worldwide goes below one trillion US dollars.

Compared to the November highs, we are now at half the capitalization and those 2 trillion reached last winter now seem like a mirage. For example, BTC and ETH have tested multi-year lows, also proving very vulnerable to this period of uncertainty.

Equities most correlated to cryptocurrencies suffer the same fate

MicroStrategy deserves a focus, as it recorded the biggest loss. Michael Saylor‘s creature holds 129,218 BTC in two companies with an unrealized loss of 18%, which brings the stock to a lousy -25.18%.

The inkling is that the week will not have much different sessions than Monday’s and they will have to clench their teeth some more.

The Fed is about to make yet another rate change and this time there are those who fear it will be even more incisive than the others with a change of even 75 basis points.

This view is shared by JP Morgan. The investment bank expects a bigger turnaround this time even though the official plans of Jerome Powell and his associates included seven increases in a year of 50 basis points.

The American Central Bank’s plan envisages seven hikes for the first year, four for next year, and then a year of monitoring with possible targeted interventions to bring the great evil of inflation back within the ranks of 3%, a threshold considered “healthy” by insiders.

The post Crypto market and equities in the red appeared first on cryptodailynews24.com.