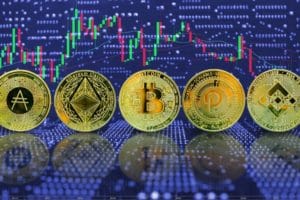 A storm in the crypto market

Yesterday a real storm hit the crypto market, so much so that the entire capitalization fell below one trillion dollars.

To tell the truth, this powerful storm has hit all financial markets globally, and not just the crypto markets, but it has done the most damage to cryptocurrency prices.

In particular, the crypto market cap has fallen below $1 trillion, a level not seen since January 2021, before the latest big altcoin bull run began.

The current level is not that far off from the previous cycle’s high, which was touched on 7 January 2018 at just over 850 billion, while yesterday’s low was 934 billion.

Bitcoin’s price is down 28% from a week ago, and is now -67% from its highs since November.

The real big problem, however, lies outside the crypto market.

Trivially, at a time when inflation is high, and people are forced to wait for even more restrictive monetary policy measures from central banks, many investors are temporarily abandoning riskier assets.

Asian markets also opened at a heavy loss today, but over the course of the hours, they recovered to almost parity with yesterday’s close.

The general situation of the crypto market, which follows the trend of the more capitalized ones

What created this storm was mainly investors’ reactions to the central banks’ monetary policy measures. Both the ECB and the Fed are raising interest rates, and this is perceived as a strong impediment to growth, so much so that the risk of a recession is being promoted. A scenario featuring recession plus inflation is considered detrimental by many investors.

Moreover, for months now the central banks themselves have started to withdraw from the financial markets the enormous amounts of money created out of thin air and injected into these circuits during the two-year pandemic. This forced withdrawal cannot take place at all without a price to pay, and the price is increased selling pressure. At a time when buying pressure is also falling, the two phenomena added together have created the perfect conditions for a collapse.

It has to be said, however, that today the collapse seems to have come to a halt, but it may also only be a temporary halt.

The next market maker could be the announcement of the US rate hike, scheduled for tomorrow. By now everyone expects a rise of perhaps as much as 75 basis points, and in this case it is possible that investors have already prepared themselves somewhat with yesterday’s selling. But should the Fed make more pessimistic statements tomorrow than expected, or announce a further tightening of monetary policy, the selling rush could return.

Yesterday also brought terror to the crypto markets over the possible failure of Celsius, which is probably why losses were much higher than in the traditional markets. However, this terror now seems to have dissipated, with the CEL token recovering all of yesterday’s accumulated losses.

However, concerns about the global economic and financial situation remain.

The post A storm in the crypto market appeared first on cryptodailynews24.com.