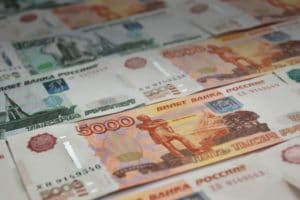 The Ruble surprises with first-class performance

The reaction to Russian interference in Ukraine has cost and is still costing Moscow’s economic system a great deal.

The ruble is starting to gain ground

The economy of the largest continental country has suffered the largest amount of sanctions for a country deemed hostile and dangerous to the international community since NATO existed.

Restrictions on the reserves held by the Russian Central Bank abroad, blocking of accounts and property to Russian oligarchs outside Soviet territory, restrictions on trade in raw materials, an almost total embargo on Moscow’s oil exports, etc.

These are just some of the numerous sanctions that the international community of the United States of America and Europe have imposed on the superpower.

At the end of February, American economists were pricing the Ruble at less than one US cent, a mortal blow to any currency and an easily imaginable fate.

To the amazement of Bitcoin.com News and the entire international community (at least the insiders), the Ruble from early March to April inclusive has been on an unprecedented ride, outperforming both the Euro and the US Dollar for the same period.

The rush to the ATMs at the end of February now seems to be a distant memory and, indeed, is one of the causes of the Russian revival.

In the second week of April, the Russian Central Bank prepared the ground for its currency’s comeback with a few but effective moves. It pegged the Ruble to gold, drastically cut rates, and forced countries that Moscow described in a list as hostile, to pay for the supply of gas and raw materials using Rubles.

The measures implemented soon caused the Soviet fiat currency to take off, returning to a value it had before the attack on Ukraine on 24 February.

Jeffrey Frankel, professor of capital formation and growth at the Harvard Kennedy School, told CBS that the case of the Ruble is an unusual one. Tatiana Orlova, leading emerging markets economist at Oxford Economics, is of the opinion that rising commodity prices are precisely one of the causes of the appreciation of the fiat currency, stating:

“Commodity prices are currently skyrocketing, and although there is a decline in the volume of Russian exports due to embargoes and sanctions, the rise in commodity prices more than compensates for these declines”.

According to Orlova, “we have this coincidence that, as imports have collapsed, exports are soaring”, reflecting the huge difference between exports and imports in Russia.

According to Zolan Kanno-Youngs and Jeanna Smialek of the New York Times, President Joe Biden is trying to avoid the monetary policy talk of raising rates to avoid embarrassment ahead of the mid-term elections.

According to Biden, the US economy, although not performing as well as Russia’s in terms of growth, is the most solid and largest in terms of volume, and he is certainly not afraid of the rise in commodity prices that he calls Putin’s price hikes as a direct consequence of military actions in Eastern Europe.

The post The Ruble surprises with first-class performance appeared first on cryptodailynews24.com.