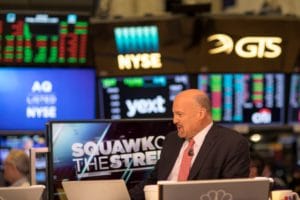 Jim Cramer returns to talk about investing in crypto

Jim Cramer, during an episode of the Mad Money program on CNBC, returned to talk about investing in crypto.

Investments in crypto according to Jim Cramer

Some tips on investing in crypto from Jim Cramer

American financial guru Jim Cramer, former hedge fund manager and now regular guest on Mad Money on CNBC and host of Squawk on the Street, returned to talk about cryptocurrency investments during a recent episode of Mad Money.

The financial expert, who was allegedly converted to cryptocurrencies by renowned crypto investor and influencer Anthony Pompiliano, specified that he himself is in possession of cryptocurrencies and specifically Ether.

At the same time, however, he also warned of the risks associated with the volatility of cryptocurrencies, thus advising people to invest no more than 5% of their capital in them. He also explained the origin of his purchase in cryptocurrencies, and specifically in ETH.

His intention was to purchase an NFT for a charity.

In this regard, Jim Cramer observed:

“But, they wouldn’t let me do dollars. I had to buy it in Ethereum, so I researched it, and it’s got some qualities I like: scarcity value, not as hot — so to speak — as bitcoin (BTC). So, I bought it”.

His recommendation was then to allocate a portion of capital towards preserving assets, such as gold for example, and also cryptocurrencies, thus seen more as an anti-inflationary tool and not as an actual stock.

This theory had already been elaborated in a speech two months ago when he said that to hedge against the risk of inflation, Bitcoin and Ethereum could be considered as valid instruments on a par with gold.

However, during the episode of Mad Money two days ago, Cramer warned that investors should not borrow money to buy cryptocurrencies.

“Borrow for your house, borrow for your car — but don’t borrow for crypto. I would never discourage you from buying crypto because of all the fortunes that have been made there, and how it could make a whole new group of people fortunes … I’d like that to be you”.

The post Jim Cramer returns to talk about investing in crypto appeared first on cryptodailynews24.com.