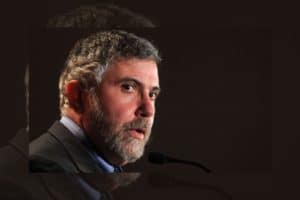 Paul Krugman fears that the crypto bubble is about to burst

Omens of a cryptocurrency debacle are nothing new, and Paul Krugman, Nobel laureate in economics, reiterates this.

Paul Krugman predicts a big crash in the cryptocurrency sector

According to Paul Krugman, cryptocurrencies have no solid foundation and are ready to explode

Over the years there has been much criticism of this asset, first because of the novelty it represented with the advent of blockchain and Bitcoin, which marked too sharp a departure from the past, generating suspicion. Then, as time went by, the market reached a capitalization of $3 billion and criticism became more and more frequent, leading to fears of a collapse of the asset due to an unsustainable bubble.

The bubble echoing what happened in 2008 in Dot-com style was the first model taken as an example, but today comes another equally famous one in the world of finance.

Economist and 2008 Nobel Prize winner, Paul Krugman, believes that cryptocurrencies are heading straight for an unprecedented debacle with the bursting of a bubble similar to that of the housing market and subprime mortgages.

In an article in the New York Times, the Nobel laureate defines the asset thus:

“It is a house built not on sand, but on nothing at all”.

Krugman compares cryptocurrencies to the housing bubble and the subprime crisis.

The fear that cryptocurrencies have no intrinsic value

On the current state of cryptocurrencies, the luminary and winner of the Sveriges Riksbank prize for economic science for his analysis of business models and the location of economic activity, referred to The Big Short to explain the current situation.

Investors in the bubble described in the book were betting on the proposition that:

“The huge rise in house prices in the years leading up to the crisis (real estate and six subprime mortgages) was a bubble, and that many of the seemingly sophisticated financial instruments that helped inflate housing would eventually turn out to be worthless junk. It just didn’t seem plausible that markets, and the conventional wisdom that markets were okay, could be so wrong but they were. The current state of cryptocurrencies”.

Referring to the Federal Trade Commission (FTC), Krugman says that crypto is turning into the preferred means of payment for many fraudsters and that the collapse of the algorithmic stablecoin UST was predictable. According to the Nobel laureate, it was not even to be considered a currency.

Krugman then goes on to say:

“It seems extreme and implausible to suggest that an asset class that has grown so large, whose promoters have acquired so much political influence, may have no real value that it is a house built not on sand, but on nothing. real estate bubble and the mortgage crisis. And if you ask me, it seems that we have gone from Big Short to Big Scam”.

Alluding in no small part to the fact that it is possible for something so established to turn out to be an ephemeral world collapsing in on itself.

The post Paul Krugman fears that the crypto bubble is about to burst appeared first on cryptodailynews24.com.