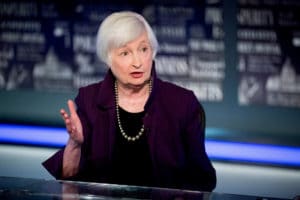 Asked about her statements of the previous year on the subject of inflation on the microphones of Wolf Blitzer of CNN’s “The Situation Room”, US Treasury Secretary Janet Yellen admits her mistakes.

“I think I was wrong then about the path that inflation would take”.

A statement that goes to confirm what everyone has labelled as one of the greatest underestimations of all time.

Janet Yellen admits she underestimated the coming levels of inflation

“There are currently major shocks to the economy that were not foreseen, and that are driving up energy and food prices. And there are bottlenecks in the supply chain that are seriously affecting our economy, which I did not fully understand (previously), but that we recognize today”.

Shedding new light on the evolution of events over the past year and her misjudgment.

More than a year ago, in fact, when analyzing the economic and financial health data, the US Secretary had labelled inflation as a small risk, thus preventing corrective measures that could have calmed the level reached by the CPI to date.

The underestimation of the inflation problem has led the Fed to late and strong decisions that are shaking the system to the tune of 50 basis point rate changes.

The plan to scale back the problem imported by the US Central Bank is very aggressive and aims to bring it back within the 3% threshold in three years.

According to the Fed, there will be as many as seven rate changes this year (two of which have already happened) of at least 50 basis points (0.50%) with four more to follow. It is hoped that by 2024 the situation will remain under control without the need for scheduled interventions.

A three-way meeting between Chairman Joe Biden, Yellen and Fed Chairman Jerome Powell was held in the Oval Office on Tuesday, during which Biden stated that he:

“Shares the Fed’s priority in lowering inflation and firmly believes in its support for Fed independence to take the necessary steps”.

Complementing Yellen’s admission, this is what a Treasury spokesperson told CNN:

“The secretary pointed out that there have been economic shocks that exacerbated inflationary pressures that could not have been foreseen 18 months ago, including Russia’s decision to invade Ukraine, multiple successive variants of COVID and blockades in China. He also pointed out, there has been historic growth and record job creation and our goal now is to move to steady and stable growth while inflation is reduced”.

The rest of the world is following the largest existing economy, China led by Xi Jinping. The other central banks are implementing aggressive measures to counter the great evil, inflation, which is being taken seriously this time.