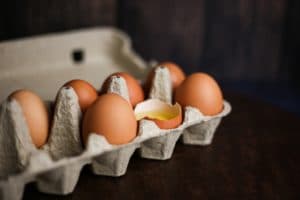 Using bar charts, the St Louis Fed compares the price of a carton of eggs in dollars from January 2021 to the present day and then does so by substituting Bitcoin for the US dollar.

The analysis of the use of Bitcoin to buy eggs

The average price for a dozen eggs

In the first graph, it is evident that in a year and a half with a fair amount of volatility, the price has risen steadily in a range from a low of $1.47 to a high of $2.52.

In the second, however, the aim is to highlight what would happen if it were possible to buy basic necessities using BTC.

The second graph not only shows an intuitively higher volatility, as anyone who is not new to cryptocurrency could imagine, but also points out that the price is equally on the rise. In addition, there are fees to consider, ranging from $2.00 to $50.00 in some cases.

For ease of understanding, when speaking of vastly different numbers (1 Bitcoin = $29,563.20 at the time of writing), the price is of course translated into satoshi, the smallest conventional unit of Bitcoin.

This evidence, as a great contemporary philosopher would say, leads to an easy conclusion in our hearts, but the answer is wrong.

Everything leads to denigrating BTC and makes us realize how inapplicable and unreliable it is, at least in terms of real-life volatility. However, the picture is partial and it is no coincidence that only the last year and a half has been taken as a reference.

Extending the graph back a few years or even to the birth of Bitcoin, one can see how progressively cheaper the use of BTC in real life is compared to the dollar, and this assumption is supported by two main factors: the inflationary nature of fiat currency (aided by the Fed’s issuance of dollars in the last two years which is now on a sudden about-face with aggressive rate hike policies) or rather the deflationary nature of Bitcoin and the moves to make it more palatable to the masses.

The dozen eggs that the Federal Reserve of Economic Data deals in will still be traded in US dollars for quite a while and we cannot raise a toast to a mass advent of Bitcoin into the (virtual) pockets of Americans, but there is a feeling that if not in Bitcoin, perhaps in USDT or a future CBDC.

Whether this is a bullish signal or not is unknown but it is certain that at least in the long run something is brewing.

The post The curious case of the price of eggs from the perspective of Bitcoin appeared first on cryptodailynews24.com.