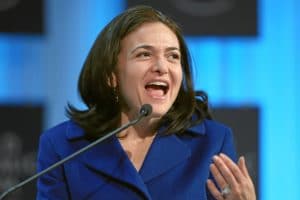 Sheryl Sandberg, the Chief Operating Officer of Meta, who helped turn Facebook into a social networking giant, resigned from her position on Thursday.

On Thursday, Sheryl Sandberg officially resigned from her position at Meta

Rumours had already been circulating for a few weeks, but the resignation of Meta‘s manager Sheryl Sandberg, 52, a Harvard graduate with a personal fortune estimated at around $1.5 billion, has left many speechless.

She had joined the company, in which she still holds a seat on the board of directors, in 2008, when Facebook was not the planetary giant it has become now, thanks in part to her courageous and enterprising leadership.

Her first words after her resounding gesture spoke of a weariness for a role that has become too demanding even for a thoroughbred entrepreneur like her. “It’s a job that I love, but it’s 24/7″, Sandberg said in a Facebook post a few hours after her announcement.

“It’s not a job that you can do and also do other things”.

Adding that she initially thought her commitment to Facebook would last no more than five years.

About what her future holds, Sandberg wrote on Facebook:

“I am not entirely sure what the future will bring. But I know it will include focusing more on my foundation and philanthropic work, which is more important to me than ever given how critical this moment is for women”.

Successes and scandals throughout her career

Sandberg’s career at Facebook has been punctuated by widely recognized entrepreneurial successes, but also by several scandals that she has had to deal with over the years, both related to her private life and that of the company itself. When she joined Facebook, the company had 500 employees (now it is 80,000) and 100 million users compared to about 3 billion now.

Sandberg has been accused of being one of the main culprits in the Cambridge Analytica scandal, the company accused of using the data of 87 million Facebook users to target pro-Donald Trump advertising campaigns.

Gossip about her private life has also been plentiful in recent years, such as that she pressured the Daily Mirror not to run a story in 2016 about her then-boyfriend, who was accused of raping a Facebook employee.

The Wall Street Journal had then reported months ago that she had used company funds to cover the expenses of her pharaonic marriage to husband Tom Bernthal.

In her lengthy Facebook post, Sandberg also wrote that her commitment to Meta was aimed at showing all women that it is possible to make your way in a still very macho world of tech companies ten years ago.

She states, in fact, that:

“The messages were everywhere that women – and I – could not be both a leader and a good mother, but I wanted to give it a try. My hope was to … help more women believe they can and should lead”.

Replacing Sandberg, who as mentioned will remain a member of the company’s board, is Javier Olivan, Meta’s current Chief Growth Officer. Olivan, who has been at Meta since 2007, stated in a post that his new role will not have the same “public aspect” as that of Sandberg.

“One of my biggest priorities will be to ensure that the business products and partnerships sides of our company are in lockstep”.

According to some, the manager’s resignation was the natural consequence of deepening disagreements over the company’s management with social media founder Mark Zuckerberg. These would have led the two to the subsequent separation from the company, but they have also been instrumental in making Facebook the most important and popular social network in the world in just a few years.