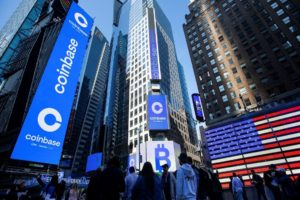 Coinbase among the Fortune 500 companies

Despite the fact that Coinbase’s stock has lost more than 75% of its value in a year, the company has made it onto Fortune magazine‘s annual list of the top 500 US companies.

This is the first time that a company in the crypto sector has made it onto Fortune’s prestigious list, which has been measuring the top American companies based on their turnover for 68 years now.

These are among the metrics considered by the prestigious American magazine to compile the ranking.

As far as revenue growth is concerned, Coinbase recorded the second best performance among the top 500 after Moderna which, with a staggering +2200 % thanks to its covid-19 vaccines, outperformed the competition.

“Both Coinbase and Moderna were among the companies that thrived under the freakish circumstances of COVID”.

The exchange, listed in April 2021 on the Nasdaq, had reached over $60 billion in capitalization in one day, racking up one of the best debut performances in the history of the American stock exchange.

In the Fortune 500 ranking, Coinbase managed to outperform incumbent companies such as Hasbro, Xerox, Hertz and Victoria’s Street.

Why Coinbase deserved the top 500 ranking

Coinbase‘s business pays handsomely in terms of turnover and revenues, which depend on trading commissions for about 85% of the total.

It is clear that in the first months of the year the drop has been substantial, for instance Bitcoin, which accounts for about 44% of the entire cryptocurrency market, has been trading for weeks below $30,000, its lowest level since December 2020, after having reached its all-time high of $69,000 in November 2021.

The company’s accounts were strongly affected by this generalized market valuation, recording net sales of $1.16 billion for the first quarter and a net loss of $430 million. Its revenue was down 53% from the $2.5 billion recorded in Q4 2021.

It is hard to imagine that, should this trend continue in the coming months, Coinbase will be able to maintain its position on the list of the 500 largest US companies.

But the exchange does not seem to be too worried about this situation, as Kate Rouche, Chief Marketing Officer of Coinbase, reiterated on the company blog, writing:

“Volatility is painful, and can be scary. That said, volatility is also natural for emerging technological breakthroughs like crypto”.

The post Coinbase among the Fortune 500 companies appeared first on cryptodailynews24.com.