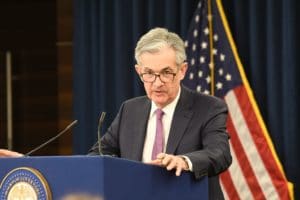 The US Federal Reserve (Fed) has confirmed the arch-enemy of the cost of money, Jerome Powell, at the helm for another four years.

Jerome Powell is still in charge of the Fed, what’s next?

The expansive monetary policies, the showering of billions to make up for the artificially induced halt in production due to the pandemic are now waning.

A worrying inflation has been looming on the horizon for some time now, but which the central banks seem not to care much about.

Inflation is perceived as an evil and the data had been signalling its return for some time, but the Fed had dismissed the problem as transitory, something normal and negligible.

However, with last year’s data, the world woke up from its torpor with a cold shower and almost double-digit inflation.

All the major countries have had to face up to the problem, first and foremost the United States of America.

Jerome Powell’s plan against US inflation and beyond

Jerome Powell, head of the world’s largest central bank, drew up a plan at a US board meeting to bring the problem down to 2% from the current 8.5%.

The plan is to raise rates by between 25 and 75 basis points each session.

There will be seven FOMC and Fed meetings until a total increase of 3.5% for 2022, which will be followed by further increases. Then there will be four in 2023 and more in 2024 until the danger returns to the 2% threshold (a parameter defined as normal).

Powell’s policy and the firmness with which he has handled the problem have earned him a reappointment in the saddle of the most important economic office in the United States, namely the Presidency of the Central Bank.

The US Senate voted with no less than 80 votes in favour out of a total of 99 to confirm Powell at the helm of the central bank, despite several controversies.

“I want to thank the Senate for confirming Jerome Powell, Lisa Cook and Philip Jefferson this week, adding to Lael Brainard’s recent confirmation. The Federal Reserve plays a leading role in fighting inflation and these qualified board members will bring the expertise. and the knowledge needed in this critical moment for our economy and for families across the country”.

Who will be the Vice-Chairman of the Fed?

The final missing piece is the nominee for Vice-President for Banking Regulation.

The White House, following the departure of Sarah Bloom Raskin due to lack of support, will have to find another name to serve the cause, but otherwise all the pieces have fallen into place with ease.

The reappointments give an important signal of continuity to the world and to insiders that “America will continue the fight against Inflation with a firm hand”.

The most incisive rate hike campaign since 1980 is only in its infancy and already boasts two major hikes, the first in March raising the cost of money by a quarter of a point and the last in May by another half a percentage point.

The post Jerome Powell confirmed at the helm of the Fed for another four years appeared first on cryptodailynews24.com.