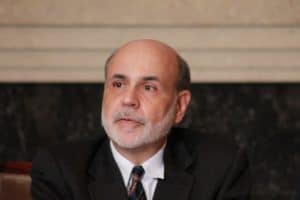 Who knows how many may remember Ben Bernanke, the former Federal Reserve Chairman appointed in 2005 by George W. Bush, after Alan Greenspan, confirmed by Barack Obama in 2008 and remained in office until 2014.

He was voted Man of the Year by Time magazine in 2009 and had to manage the very difficult phase of the subprime mortgage crisis in 2008. He made difficult and courageous choices, managing to lead the US out of one of the worst financial crises in its history.

In recent days Bernanke spoke in a lengthy interview with the US radio and television channel CNBC. Among other things, he also discussed cryptocurrencies and Bitcoin in particular.

In the lengthy interview he had critical words to say about the policy of the current Governor Jerome Powell, who in his view responded late to the problem of high inflation in the US.

During an interview with CNBC’s Andrew Ross Sorkin, which aired during the ‘Squawk Box’ show on Monday, Bernanke said:

In 2008, Bernanke had to react promptly to the subprime mortgage crisis, which had led to the bankruptcy of Lehman Brothers with the risk that this would unleash a domino effect on the entire US financial system.

Bernanke’s response was without hesitation an unprecedented expansionary policy. Now, the situation seems in some ways to have reversed itself, but Bernanke said he understood the reasons for the Fed’s delayed reaction to this economic phase.

“One of the reasons was that they wanted not to shock the market,” he said. “Jay Powell was on my board during the Taper Tantrum in 2013, which was a very unpleasant experience. He wanted to avoid that kind of thing by giving people as much warning as possible. And so that gradualism was one of several reasons why the Fed didn’t respond more quickly to the inflationary pressure in the middle of 2021”.

Bernanke speaks out about cryptocurrencies

Bernanke then touched on the subject of cryptocurrencies, following the collapses of recent weeks.

He bluntly described cryptocurrencies as merely a speculative tool and did not see them as a possible alternative to traditional currencies.

During the interview he added:

“If bitcoin were a substitute for fiat money, you could use your bitcoin to go buy your groceries. Nobody buys groceries with bitcoin because it’s too expensive and too inconvenient to do that. Moreover, the price of groceries … varies radically day-to-day in terms of bitcoin so there is no stability either”.

According to the American economist, cryptocurrencies have failed in their attempt to become alternative currencies to fiat currencies and are mainly used to fuel underground and illicit or criminal activities.

According to him, Bitcoin and cryptocurrencies will remain alive only and exclusively as a speculative asset and not to be considered at all as a store of value, like gold, nor even as an anti-inflation hedge.