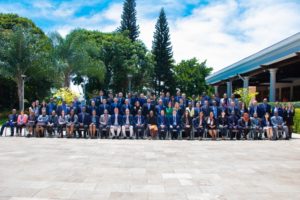 President Nayib Bukele announced that 32 central banks and 12 financial authorities from 44 countries will meet in El Salvador to talk about Bitcoin.

In a series of tweets, Nayib Bukele, President of El Salvador, announced that today they would meet with as many as 32 central banks and 12 financial authorities representing 44 countries, to talk about Bitcoin.

“Tomorrow, 32 central banks and 12 financial authorities (44 countries) will meet in El Salvador to discuss financial inclusion, digital economy, banking the unbanked, the Bitcoin rollout and its benefits in our country”.

Others include the National Bank of Rwanda, the Nepal Rastra Bank, the Sacco Societies Regulatory Authority (SASRA), Kenya, the State Bank of Pakistan, the General Superintendency of Financial Entities of Costa Rica, the Superintendency of Popular and Solidarity Economy of Ecuador and the Central Bank of El Salvador.

El Salvador: “Bitcoin is good for the world”

At the moment there are no official press releases about the super meeting, only testimonies from Bukele, who only a few hours ago posted the following:

3 days to go…#Bitcoin is good for the world

“Planting seeds in 44 countries. 3 days to go… Bitcoin is good for the world”.

The Bitcoin Beach account also wanted to give an idea of what is happening in El Salvador, showing the map with the countries interested in Bitcoin, who want to discover its benefits.

The risk of default after the collapse of BTC below $30,000

And yet, just yesterday, there was also talk of how the drop in Bitcoin’s price below $30,000 could lead El Salvador to risk default.

In the meantime, Bukele continues to accumulate the currency with his “buy the dip” strategy, which includes his latest much more substantial purchase of 500 BTC. However, critics and some reports do not suggest that El Salvador is doing well.

On the one hand, Peter Schiff, the stock broker, described Bukele’s actions as the result of taxpayers’ money helping BTC whales, on the other hand, the delay in the launch of the volcano bond, the Fitch rating agency’s lowering of the default index to CCC, and the majority of the population still not using Bitcoin, are just a few details that suggest that Bitcoin in El Salvador is not taking off.