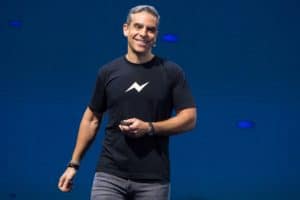 After leaving Facebook last year, many were wondering where would David Marcus, who was the head of the finance division of the social networking giant for seven years, go next. After five months, this question finally seems to have an answer.

I wanted to share that we are starting a new company called @lightspark to explore, build and extend the capabilities and utility of #Bitcoin. As a first step, we’re actively assembling a team to dive deeper into the Lightning Network. (1/3)

In a tweet, the former senior Facebook executive announced the creation of his new creature Lightspark, which is based on Bitcoin’s lightning network.

Marcus was the executive who ran Meta’s cryptocurrency and financial services operations until his departure last November. Marcus, who would also co-found the stablecoin project Diem, formerly Libra, was previously president of PayPal.

Diem eventually closed last year due to regulatory pressures and its assets were subsequently sold to Silvergate in January.

With his new creation, Marcus will have the role of CEO and will have at his side a team consisting mostly of the team that was responsible for the development of Libra. Not many details of the deal have been disclosed except that the new start-up is expected to deal with payments in Bitcoin with the clear objective of “exploring, building and extending the capabilities and utility of Bitcoin”.

We’re Lightspark. A company created to explore, build and extend the capabilities and utility of Bitcoin. We’re assembling a team to dive deeper into the Lightning Network. Much more to come as we make progress. https://t.co/xMo8BjNjAW.

The objective of the Lightspark project

From what we have been able to learn so far, Lightspark plans to create a back-end infrastructure for companies, developers, and merchants who wish to carry out transactions on the Lightning Network.

In addition to Marcus, James Everingham, who was previously Vice President of Engineering at Novi, is expected to be part of the project. Then follows Christian Catalini, who built Diem with Marcus, and Christina Smedley, former Chief Marketing and Communication Officer at Robinhood, who will lead communications for Lightspark.

The project will run on Bitcoin’s Lightning Network, which is dedicated to creating faster and cheaper transactions on top of the Bitcoin network. In March, according to one report, the network reached about 80 million users. Many Bitcoin payment apps such as El Salvador’s famous Chivo are built on this network.

“When I met David in 2010, he was in his early 30s and had never really had a job. He’d always been a founder. It is who he is — a startup founder through and through. While he had a highly successful tour through PayPal and Facebook, he is back to playing to his strengths.”