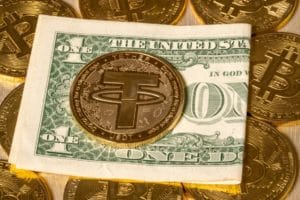 According to CoinGecko‘s data, in the last 24 hours, the crypto markets saw a trading volume of $133 billion for Tether (USDT).

USDT, the most capitalized stablecoin in the market, sets a new record in trading volume

Compared to the total market capitalization of around $83 billion, this is 1.6 times higher.

This is similar to the value on 2 November 2021, which was a few days before the prices of many cryptocurrencies, including Bitcoin and Ethereum, hit all-time highs.

To use another important metric of comparison, it is enough to mention that in the same period, the trading volume of Bitcoin was $71 billion (slightly more than half of USDT), and that of ETH as low as $43 billion.

The most traded pair on spot markets was obviously BTC/USDT, in particular on Binance, followed by ETH/USDT.

On Binance, it had not been since June 2021 that similar trading volumes occurred, although they were still about half of what they were in May last year.

It is worth noting that the third most traded pair yesterday in Tether was LUNA/USDT, also on Binance, with a volume lower only than in May last year. The fourth most traded pair was UST, the stablecoin of Terra.

Binance is the king of swaps

The fourth one is surely the one with the most sensational data, both because on Binance yesterday’s swap volume was the highest ever, and above all because the ratio between the two stablecoins pegged to the dollar dropped well below parity.

At one point, UST was even worth only 0.6 USDT, 40% less than what should be expected. The value then went back up to 0.9 USDT, but it is still relatively far from parity.

Curiously, yesterday the highest peak of trades between UST and USDT on Binance occurred when the price slightly rebounded from 0.82 to 0.93, well before the collapse to 0.6.

It is worth noting that it is since the end of April that the market capitalization of USDT has stopped growing.

It had already happened in January, when for several days it had remained stationary at around $78 billion, then had resumed growing since mid-February, after a slight decline. The growth stopped on 23 April.

At present, among stablecoins pegged to the US dollar, Tether continues to dominate with a little less than twice the market capitalization of the second largest, USDC. Still far behind are BUSD and UST, and even farther behind is DAI. None of the others exceed $3 billion in capitalization.