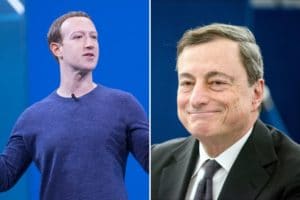 Mark Zuckerberg and the meeting in Rome with Mario Draghi

Mario Draghi welcomed the founder of Meta (former Facebook) Mark Zuckerberg at Palazzo Chigi in Rome to discuss metaverse and technological innovation within the country.

During his visit to Italy, Mark Zuckerberg met with the Prime Minister of the country, Mario Draghi. The two talked about important issues according to several news agencies.

According to the Minister for Digital Transformation Vittorio Colao, the two figures exchanged opinions and ideas on the technological future of the country, and especially on the investments needed to bring Italy back with a transition in which the American company wants to be an important part.

The meeting, which lasted an hour and ended at 11 AM (CET), was also held in the presence of the Minister for Digital Transformation Vittorio Colao, who organized the meeting.

Italy and its projects on the metaverse

Italy is betting heavily on the metaverse and to do this it needs a strong synergy between public and private, between politics and civil society.

The transition towards technological development is a powerful driving force for the Italian economy as it will require a large number of workers with great joy for employment levels.

A Meta spokesperson at the end of the meeting stated:

“A joint effort between companies, politics and civil society will be required to bring the metaverse to life. In today’s meeting we confirmed our collaboration with the Italian government to enhance the country’s strengths in the technology and design sectors and identify future investments. We are pleased to have been able to discuss the cultural, social and economic opportunities that the metaverse will bring to Italy and we look forward to continuing this collaboration”.

In other words, we are facing the first steps of a partnership between Italy and Meta that could secure important commitments for the future of the American company and the country.

The collaboration is deep and Mark Zuckerberg has taken things head on by making a full immersion in Italy since the beginning of May.

As soon as he arrived with his wife Priscilla Chan, they took time to visit Siena, then Turin, Milan and finally Rome, hosted by Mario Draghi at Palazzo Chigi.

The meeting held in Milan

On 2 May in Milan, the American entrepreneur met with a pool of luxury and high fashion representatives including the CEO of Luxottica, Lorenzo Bertelli of Prada, Diego della Valle patron of Todd’s, Brunello Cucinelli the King of Cashmere, Remo Ruffini of Moncler, Marco Gobbetti for Ferragamo, Federico Marchetti and Geoofroy Lefebvre of Yoox and Yoox Net a Porter and the CEO of Meta Facebook Italia Luca Colombo.

The founder of Meta also met with the President of Luxottica Leonardo del Vecchio, representing the world of fashion and luxury so as to find agreements for the creation of glasses that can be controlled by a wrist device to control neural impulses.

The meeting then addressed the future of the country and collaborations with regard to the metaverse in the wake of those already established with Balenciaga and Fortnite with regard to gaming.

Indeed, Zuckerberg’s plans include a huge order for the creation of glasses with neural controls that come from a prototype bracelet with which the EssilorLuxottica team is working.

The CEO of the blue social stated that:

“It’s great to be back in Milan to discuss plans for new smart glasses with Leonardo Del Vecchio and the EssilorLuxottica team. Here Leonardo is using a prototype of our EMG bracelet with a neural interface that will allow us to control glasses and other devices”.

The Italian company, which is the world’s largest holding company for the production and sale of eyewear and lenses with regard to smart glasses, is working to provide the fundamental devices for the metaverse, a revolution that speaks Italian but will transform the way of life of all citizens of the world.

EMG stands for electromyography and gives a good understanding of how this project works.

Essentially, the monitoring of the electrical activity of the muscles thanks to special sensors integrated in the bracelet allows to relate the impulses transmitted by the spinal cord with the digital commands needed allowing the movement in the metaverse. This type of technology will also give a boost in the area of augmented reality.

The post Mark Zuckerberg and the meeting in Rome with Mario Draghi appeared first on cryptodailynews24.com.