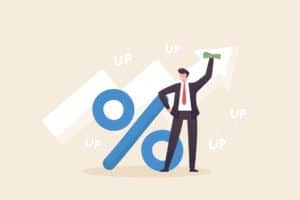 Today the US central bank, the Federal Reserve, will announce its decision on a hypothetical interest rate hike.

The market expects interest rates to rise by 50 basis points

Usually these increases are 25 basis points at a time, but this time it is assumed to be 50 basis points.

If so, it would in fact be the largest such adjustment in 20 years.

Indeed, there are those who speculate that it could even be as much as 75 basis points, although this latter assumption is not shared by many.

The key point is high inflation, which rose to 8.5% in April in the US, the highest annualized figure in 40 years.

Such abnormal situations call for abnormal actions, so many believe that the Fed is unlikely to simply raise rates by 25 points today, as usual, but will be forced to double down.

Theoretically, in light of all this, a 75 point increase could also be possible, but the markets consider this to be very unlikely.

Certainly the financial markets have already priced in a possible 50-point increase, especially as there is speculation that there could be another increase of the same magnitude in the coming months.

However, if the increase were to be different, then investors would presumably react quickly to try to reallocate their capital more efficiently, and this would probably generate some shocks.

But the risk of a rise of more than 50 points is not the only reason that could trigger panic or euphoria in the markets. Much will also depend on what the Fed says, particularly on any changes in monetary policy in the short and medium-term.

Indeed, markets seem to be expecting the announcement of the Fed’s balance sheet reduction plan at a rate of $95 billion per month.

Provided that there is no major news on interest rates, as is likely, the decisions on the balance sheet reduction plan will be the real market movers.

It is worth remembering that reducing the Fed’s balance sheet means that the central bank will sell some of its financial assets on the markets in order to withdraw dollars from the markets. This means withdrawing from the markets the dollars that have probably boosted the US financial markets over the past two years to new all-time highs in the midst of a pandemic.

Again, the reduction in the balance sheet has already been priced in by the markets, but not necessarily its pace. If that pace were to be faster than expected, the markets could react badly.

Many are speculating that at this point in time the Fed is prioritizing the fight against inflation, to the extent that it is prepared to question the economic recovery in order to avoid further increases beyond the current 8.5%.

Moreover, even after today’s announcement, this process will continue and may change in the coming months. As such, we can expect a volatile 2022 if the Fed is forced to take decisions that the markets do not like.