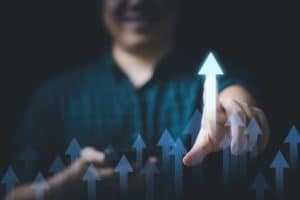 The Fed and its interest rate hike plan

First interest rate hike of 50 basis points by the Fed

Like clockwork, the Fed’s second rate hike arrived on Wednesday.

After days of full immersion, the Federal Open Market Committee (FOMC) decided to raise interest rates yet again, and this time they chose to be more incisive than usual.

The FOMC opted for an aggressive intervention of 50 basis points (0.50%).

The increase follows the first one in March of this year, which was smaller (25 basis points / 0.25%).

In this second meeting, Jerome Powell has opted for a tougher move: if the previous intervention was the first since 2018, this is the fastest increase in a single solution since 2000.

The outlook is clear, getting inflation back to a level around 2% is the ideal outcome but we are a long way off and the Fed knows it.

The process of normalizing the CPI is estimated to take three years, with seven rate hikes planned for this year, four for 2023 and targeted interventions as required for 2024, which should be the year in which the problem is resolved.

Back in April, Powell was already predicting a 50 basis point increase, but there was no certainty. There was hope for more data to be certain, but it was not forthcoming and the Fed’s hand was heavy.

The central bank’s policies have not left the state of affairs unchanged. For example, from November 2021 to the present, i.e. since the Fed announced its plan to raise rates to tackle the perennial evil of inflation, the price of Bitcoin has fallen 40% to around $40,000.

The Fed also announced that it will begin selling a slice of its balance sheet of bonds and mortgage securities that doubled to $9 trillion with the pandemic. In three months’ time, the Treasury cap will increase to $60 billion and the mortgage securities cap to $35 billion. The balance sheet clean-up operation will bring a temporary shock to the financial markets, and could potentially have negative effects in the long term.

Janet Yellen, US Treasury Secretary, told the Wall Street Journal that economic growth is expected to remain steady this year and that inflation will gradually return without necessarily entering a recessionary spiral.

The market had already been anticipating an aggressive Fed policy and now expects further hikes of at least 0.50% at each Fed and FOMC meeting, with a likely spike of 75 basis points in one go, which looks a little too aggressive, to be honest.

The plan to fight inflation

As early as November 2021 and as the data continued to show, inflation was beginning to emerge as a major threat to the financial world.

The pandemic crisis had severely weakened economies around the world (which were already struggling), the major international banks were predicting a long year of rate hikes also due to the fact that the US Central Bank had been less than vigilant and had underestimated the CPI data.

The Fed had declared (in line with Goldman Sachs‘ wishes) that it intended to raise rates by a total of 175 basis points, to be spread over seven periods of the year, one for each FOMC and Fed meeting.

This is how the other central banks in the world would have proceeded in terms of containment.

Four more rate hikes would follow in 2023, and in 2024, a step-by-step approach would be taken by carefully monitoring data with the aim of bringing inflation back down to a mere 2%, which the Fed considers to be a reasonable percentage.