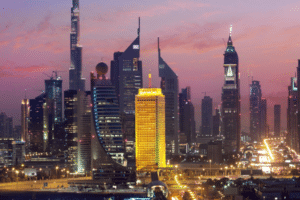 The Virtual Assets Regulatory Authority (VARA) in Dubai has officially announced its entry into The Sandbox metaverse.

VARA Dubai opens an office in The Sandbox

A new VARA Dubai Headquarters in The Sandbox

In fact, VARA has established its “headquarters” (HQ) within one of the most widely used and popular metaverse.

Welcome to the #Metaverse, Dubai!

We are honoured to welcome you to @TheSandboxGame!

The HQ will be called MetaHQ and was unveiled directly by Sheikh Hamdan bin Mohammed bin Rashid Al Maktoum, Crown Prince of Dubai and Chairman of the Arab country’s Council.

The Sandbox is one of the best-known crypto metaverse in existence and is based on the Ethereum blockchain.

It is worth noting that the price of The Sandbox’s token, SAND, has strangely been relatively unresponsive to the news, as it is still 6% below the levels of seven days ago, and 31% below those of a month ago.

However, over the past 12 months, it has risen 315%, so it is possible that the big boom has already exhausted it last year.

The fact that it is still 70% below its peaks could suggest that there is still some untapped growth potential left.

The importance of VARA in the Dubai ecosystem

VARA provides a secure operating framework for the growth of the virtual asset sector in the country, while simultaneously seeking to protect both the market and investors.

Moreover, the Dubai government believes that virtual assets are an integral part of the future digital economy and wants to make the UAE the cryptocurrency capital of the world.

During the inauguration of MetaHQ on Sandbox, Sheikh Hamdan bin Mohammed spoke highly of virtual assets and the role Dubai is playing in this development.

For example, he said that MetaHQ marks the beginning of a new era in which the Dubai government is using innovations to extend its services and regulatory power without constraints or boundaries.

He also said that VARA represents a serious effort to build a powerful new economic sector that will contribute to the nation’s economy and create new investment opportunities.

Dubai sees the virtual asset industry as the engine of the global economy of the future. He also added that VARA’s acquisition of land on Sandbox is a symbol of their confidence in this sector.

All of this produces an increase in GDP for Dubai, and sets an example for the international community so that everyone can benefit from a virtual economy that can expand safely and sustainably.

It remains to be seen whether VARA’s presence in the metaverse is anything more than a mere symbol, as the crypto industry in Dubai is now expanding considerably.

It is likely that Dubai’s clear and unrestricted regulatory framework for crypto operators is one of the country’s greatest competitive advantages over other countries, such as the United States, where laws in this regard are still unclear, or place severe limits on the development of the crypto industry.