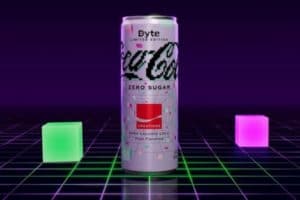 Coca-Cola Zero Sugar Byte, the drink of the metaverse, is available for purchase from 2 May 2022.

Following the launch of the pixel-flavoured drink on a new island created in Fortnite, now the global drinks giant is announcing that it is possible to buy a two-pack for $14.77, with a maximum of three boxes per customer.

Coca-Cola Zero Sugar Byte, on sale from 2 May

Coca-Cola informs its followers that from 2 May the physical sale of Coca-Cola Zero Sugar Byte, the first taste of Coca-Cola born in the metaverse, is available on the dedicated website.

“Welcome to cybertaste. Byte available now for a limited time only. Get yours, only at: https://CokeURL.com/BuyByte“.

This Coca-Cola Zero Sugar Byte will be available in extremely limited quantities, and the purchase portal will only be open for a limited time while supplies last.

Specifically, Coca-Cola’s Byte went on sale on 2 May and it is now possible to purchase a two-pack for $14.77, with a maximum of three boxes per customer.

Coca-Cola and its sodas in the metaverse

The Coca-Cola Zero Sugar Byte is the second drink the global giant is launching through its experimental Creations platform.

Back in early April, Coca-Cola Zero Sugar Byte was launched in collaboration with gaming organization PWR, on a Pixel Point Island in Fortnite, where visitors can hunt for hidden treasure, play mini-games and participate in other activities.

Not only that, but this version of Coca-Cola comes on the heels of the success of the Starlight drink, the first drink produced on Creations that evokes the “taste of space” by recalling space travel by companies such as SpaceX and Blue Origin.

In this case, however, Coca-Cola Zero Sugar Byte is meant to evoke the pixelated taste that is bound to tempt all lovers of the iconic Coca-Cola drink.

Here’s how one buyer commented on his experience:

“I received a tall, slender can of Coca-Cola’s new Byte Coke and upon opening it, it had quite a loud fizz — much more carbonation than the Starlight Coke. This one has a brown hue like a regular Coke Zero (I expected it to be purple), with a very sweet smell. When I took a sip of the Coke Byte, the fizziness was so strong that it reminded me of when I would eat Pop Rocks as a kid. Maybe that’s what pixels taste like? The flavor was soft but still tasted like a Coke Zero. I could taste the sweetener used to replace the sugar… possibly Splenda?”

From metaverse to gaming

Besides producing and launching new limited editions of Coca-Cola in the metaverse and then physically, the global soft drinks giant is also heavily interested in the gaming sector.

At the end of March 2022, Coca-Cola has partnered with Riot Games to become a founding partner of League of Legends: Wild Rift and Wild Rift Esports, the two fast-growing mobile gaming franchises.

This innovative, multi-year partnership gives Coca-Cola the opportunity to connect with players and fans in a meaningful way.