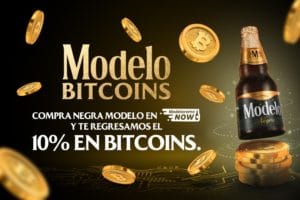 Modelo, the Mexican beer producer, has announced a 10% cashback scheme in Bitcoin on consumer purchases in Mexico.

Mexican beer giant, Grupo Modelo, has recently launched the Model Bitcoin program consisting of a 10% cashback. The program is intended only for Mexican consumers who buy Modelo Negra beer in the Modelorama Now marketplace.

The cashback will only be available for beer purchases on the marketplace and is in no way refundable, transferable or redeemable for other rewards or fiat currency. The cashback in Bitcoin will be transferred to a Binance wallet and there is also an explanation on the company’s website of how to open it for those who do not yet have an account on the Chinese exchange.

The scheme, which began on 29 April, will run for one month until 29 May 2022 and promises to send the money in BTC within 45 minutes of buying the beer. This will be notified to the customer via email once the transfer has taken place.

It is the first project of its kind in Latin America, where the NFT and metaverse market is developing a lot. A few days ago in Argentina, a cryptocurrency with a rather unambiguous name, Pinta token, was launched on Binance Smart Chain allowing people to buy beer.

In March, the Dutch beer giant created the first virtual beer in the metaverse of Decentraland, Silver.

“It is a self-aware idea that pokes fun at us and many other brands that are jumping into the metaverse with products that are best enjoyed in the real world. For now, you can’t taste pixels and bytes. So, we want to make a joke about that and remind everyone that nothing beats the taste of a refreshing beer, including our new virtual Heineken® Silver, in the real world”.

This new Bitcoin cashback scheme from the Mexican beer giant is part of an aggressive promotional campaign to increase its sales not only in Latin America, consolidating its position as the largest producer, but also seeking to oust rival brand Budweiser from the top spot in US sales.

According to Nielsen data, it has been the most imported beer in the United States for three years and has been in second place in sales for the past two years behind the Budweiser brand. In some major cities, though, such as Chicago, Dallas, Los Angeles and San Diego, its flagship product, Modelo Especial, was the best-selling beer last year.

The post Modelo launches a cashback system in Bitcoin appeared first on cryptodailynews24.com.