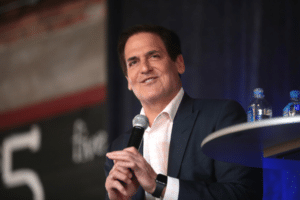 Mark Cuban: DOGE as a solution to Twitter spam

In a discussion on Twitter raised by Elon Musk (new owner of the social network of crypto-lovers) about the problem of spam, Mark Cuban intervened and suggested the use of Dogecoin (DOGE) as a solution.

Not a bad idea

“We add an optimistic roll up to Doge.  Everyone puts up 1 doge for unlimited posts. If anyone contests a post and humans confirm it’s spam, they get the spammer’s Doge. Spammer has to post 100x more Doge If it’s not spam, the contestor loses their Doge. DogeDAO FTW!”

Basically, Mark Cuban, billionaire entrepreneur and president of the Dallas Mavericks NBA basketball team, has suggested that everyone put a DOGE for unlimited posts on Twitter and that when flagged as spam, if upon verification they are, the spammer must give his DOGE, otherwise the flagger will do so.

In addition to the 9k likes to Cuban’s post, Dogecoin co-creator Billy Marcus and Elon Musk himself also joined in, tweeting “not a bad idea”.

Whether the idea goes through or not, it is clear that the two billionaires are both optimistic about the use of Dogecoin (DOGE), the memecoin par excellence.

For Musk, this is nothing new; indeed, it seems that the $44 billion purchase of Twitter by the world’s richest man even influenced the price of DOGE, which pumped 30% immediately after the news broke.

But even the Cuban-Dogecoin relationship has its own history. Last summer, Cuban claimed that Dogecoin is the “strongest” cryptocurrency as a medium of exchange.

Trying to believe it, Cuban began accepting DOGE as payment for goods in March 2021, with the Dallas Mavericks organization seeing substantial sales made with the meme cryptocurrency.

Not only that, Cuban also recently spoke out on Ethereum, the second-largest crypto by marketcap, stating that ETH’s price could go up soon thanks to the Merge update.

According to him, there are essentially two reasons for this:

The cause has been attributed to the purchase by Elon Musk, which has been reported in all media. The hypothetical reasons that emerged as the cause were: