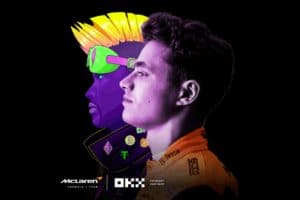 A new partnership has been forged between two major brands, McLaren Racing and crypto exchange OKX.

Officially, the partnership will begin this weekend on the occasion of the Miami Grand Prix 2022

Over the next few years, McLaren and OKX will work together to not only expand the exposure of both brands, but also bring a new paradigm of fan experience to market.

In addition, the two entities will seek to bring innovation in different areas, bringing the world of investment and racing into unison year after year.

OKX is the world’s second-largest crypto exchange by turnover, which saw the value of trades on the platform grow by 700% in 2021. It boasts a user base of 20 million subscribers and has a worldwide presence, covering 180 different markets.

Since 2017, it has been committed to conveying continuous innovation in the field of decentralized finance (DeFi), expanding and spreading the idea of a free and unfettered financial system.

In addition to exchange services, OKX has launched MetaX, its own portal dedicated to the DeFi, metaverse and NFT world.

On the opposite side of the spectrum is the world-famous British car manufacturer. McLaren Racing was founded in 1963 by New Zealand racing driver Bruce McLaren.

He entered the world of F1 for the first time in 1966 and brought home great success. Among its many awards, the team can now boast of 20 World Championships and more than 180 Grands Prix.

McLaren is also very committed to sustainability. In fact, it was the first F1 team to receive the Carbon Trust Standard in 2010 and has maintained it on a bi-annual basis ever since. It also became a signatory to UN Sport’s Climate Action Commitment in 2021.

Statements from the two parties

Below are some of the statements from those working on this important partnership. First there is Haider Rafique, Chief Marketing Officer of OKX, who announces:

“The McLaren brand stands for everything that is great about F1. Speed, reliability, and performance are at the core of any top-class crypto trading platform. We innovate on our platform every day, ensuring the highest trade execution speed to our users, requiring ‘pit-like’ team collaboration and instincts”.

He is then joined by Lennix Lai, Director of OKX, who said:

“We love the McLaren brand and the McLaren team. In a short time, we have discovered a unique friendship and philosophical alignment between us. This is about creating magical moments for the fans for the years to come”.

Last but not least is the announcement from Zak Brown, CEO of McLaren Racing, who states:

“We are thrilled to announce this primary partnership with OKX ahead of the Miami GP. In a rapidly-evolving field, OKX is a long-established crypto brand that brings innovation, analytics and accuracy to accomplish great things.

The first-ever Miami Grand Prix is the perfect occasion for us to launch this significant partnership, through which we will collaborate with OKX to take our fan experience to all new levels”.

Both OKX and McLaren are already preparing great new products to launch in the marketplace as the two players celebrate their 6th and 60th anniversaries next year.

The post Major new partnership between McLaren and OKX appeared first on cryptodailynews24.com.