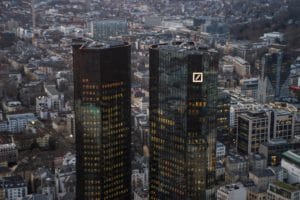 Deutsche Bank, a major US recession is on the way

Deutsche Bank predicts a violent recession in the US next year that will not be stopped even with an aggressive Fed policy.

Recession in sight for the US, according to Deutsche Bank

According to the German investment bank Deutsche Bank, there will be a full-blown recession in the US next year.

Inflation at 8.5%, extreme difficulty in finding some of the raw materials needed for the production of large companies and a global military escalation that shows no sign of stopping, will lead the US into an inevitable recession.

To be fair, not all ratings predict this, but the fact is that they all agree on the ultimate evil, inflation.

This will be one of the causes if not the main one that will trigger the downward spiral. Despite the Fed’s promised efforts to bring the inflation rate back to a sustainable 2% in three years with an aggressive policy, this will not be enough.

According to Deutsche Bank, an aggressive policy of raising interest rates is certainly the right way to go, but the time needed to cure the disease is too long to avoid a huge recession.

Inflation will pass, but first we will all have to deal with a major crisis, hoping for a different spillover from what happened in 2008.

David Folkerts-Landau, the group’s chief economist and head of research, in a report compiled by analysts at the Berlin-based institute said:

“We will have a severe recession, but our firmly held view is that the sooner and more aggressively the Fed takes action, the less long-term damage to the economy will be. We cautiously assume a Fed funds rate that moves well in the 5 range. % to 6% will be enough to do the job this time around … This is partly because the monetary tightening process will be reinforced by the Fed’s shrinking balance sheet”.

Other banks and rating firms are more cautious, but not too much so

The widespread opinion among financial operators and analysts at the various banks and rating companies is that the situation is far from rosy for the same reasons put forward by the German bank.

Goldman Sachs, for example, considers a recession of this magnitude to be 35% likely, a less drastic viewpoint, but one that still emphasizes the problem of inflation.

According to the American investment bank, a rate increase of between 5% and 6% should prevent the worst from happening.

“Inflation should ease from current levels and we do not expect a recession from the interest rate hike”.

Jacob Manoukian, head of investment strategy at JPMorgan in the US, is more cautious and believes that a recession is technically possible but in fact completely unlikely as things stand at the moment.

Is Deutsche Bank isolated in its dire predictions? Not at all, Michael Hartnett, Chief Investment Strategist at Bank of America is in line with this prediction, believing that it is not only possible, but that it is already coming.

The post Deutsche Bank, a major US recession is on the way appeared first on cryptodailynews24.com.